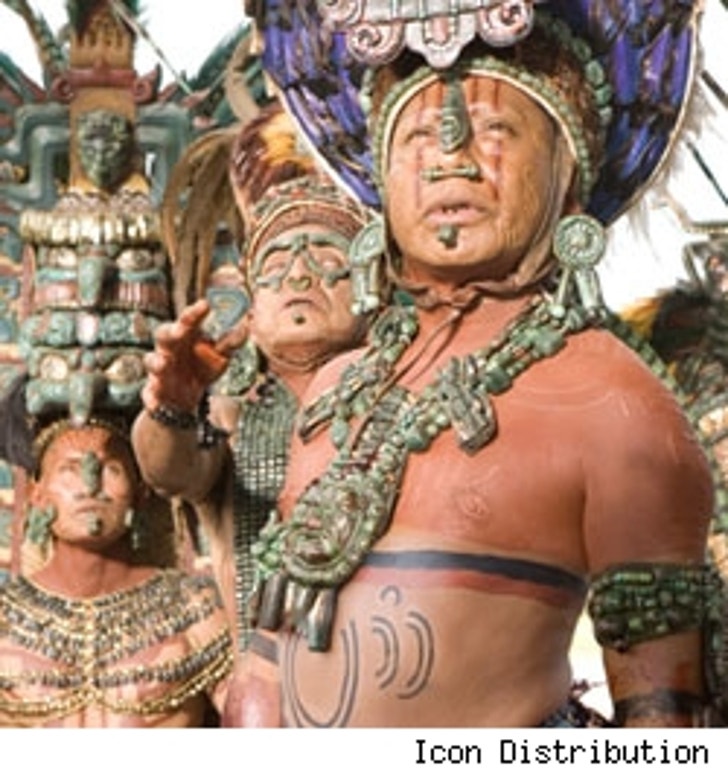 I just got out of a screening of "Apocalypto."

Here is a movie that gives fresh meaning to the infamous New York Post headline, "Headless Body in Topless Bar." More heads roll than in an al-Qaeda snuff film; I lost count at three or so human hearts torn out and shown to their victims before they died.

So, the first question you probably have is, "Is it any good?"

Unfortunately, it is. Very good.

I would prefer that it wasn't. Would that all anti-Semitic lunatics have their come-uppance, fail miserably -- publicly -- then limp off into Howard Hughes like isolation, micturating in milk bottles and muttering, "The Way of the Future," over and over. Thinking people see Mel's stage-crafted "apologies" for what they are: Damage control. Because at his core, he is still an anti-Semite. But enough about Mel the Bigot. Let's talk about Mel the director.

I am a big believer in letting art speak for itself. Ironically, had Gibson not gotten plastered at Moonshadows and met up with Malibu's finest, there would be a strong, but ironic, possibility that I would now be defending him as "a new Mel" -- one who clearly had rejected any of the hateful depictions of Jews in "The Passion of the Christ" in favor of a new world view. A 'new beginning,' if you will.

Ironically, having seen "Apocalypto" (from the Greek for "new era or beginning") the parallels between the Mayan conquerors' lust for human sacrifice and the Third Reich's own extermination of millions of Jews are downright eerie: The Yucatan marauders' crops are dying, and so the people look to a high priest who will, to quote the film, make them "a people of destiny," one who can replace godly malediction with benediction.

Watching "Apocalypto," you almost expect the high priest who's sacrificing Mayans on the pyramid to start goose-stepping.

Apres Moonshadows (and, boy, after seeing "Apocalypto," will you ever understand what a prophetic name that bar has), it seems almost naive to think a director capable of producing a film with such clarity about humankind's propensity for cruelty and genocide, but to be so blind to it in his own life.

Then again, maybe everyone can make a new beginning. Or at least try.