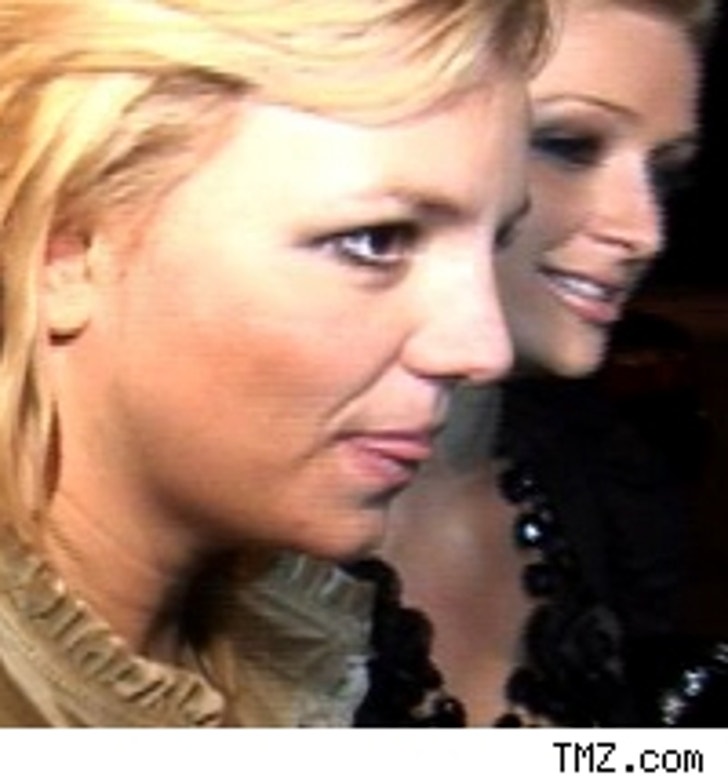 Could it be that the toxic twins – Britney and Paris – are BFFs no more?

The dynamic panty-free duo have gone their separate ways, says Page Six. After a couple frantic weeks of late-night debauchery and flashbulb-exploding exhibitionism, the pair's friendship has cooled. "Britney has been told by her people that if she ever wants a comeback, she has to stay far away from Paris and start acting like an adult," says a source.

Indeed, TMZ has spotted Paris recently getting back to her usual party posse, including Brandon "Greasy Bear" Davis, sister Nicky, and friend-accessory Kim Kardashian. Meanwhile, Britney has been digging in at the studio and stepping out with music producer J.R. Rotem.

Angelina Jolie says she's the scolder in her utopian family, but admits that 2-year-old Zahara is the real queen in the Jolie-Pitt household.

"I am the disciplinarian," says Mama Angie to People. "Brad can be, but if Z doesn't get the bottle from me, she'll very quickly run to Daddy." Even with two movie-star parents, there's a very clear No. 1 in the house, at least according to Pitt. "I bet if you asked Brad, he'd say Zahara. Mad is very smart, but he's got a certain sense of calm. Zahara is possibly the funniest person I've ever met in my life ... She's definitely the biggest personality in the house.

Naomi Will Never Be Alone Again

Blackberry-wielding supermodel Naomi Campbell will not face charges stemming from her October arrest for allegedly attacking her drug counselor in London. Campbell had been taken into custody in October after her female therapist claimed to have been scratched in the face by Naomi. But the Crown Prosecution Service says it won't press charges. Naomi, for her part, has learned a valuable lesson – always have a witness. "I have to be very careful who I'm around, what I say ... I prefer not to be 'round someone on my own anymore because I just don't know the agendas they have."

The Golden Globe nominations were announced this morning, and "Babel" garnered the most, with seven, including best dramatic film and supporting acting nods for Brad Pitt and Rinko Kikuchi. Leonardo DiCaprio was nominated twice in the Best Dramatic Actor category for "The Departed" and "Blood Diamond." Helen Mirren was also twice-nominated, for playing Queen Elizabeth I on TV and Elizabeth II in "The Queen."

Mel Gibson's "Apocalypto" shocked everyone by scoring a best foreign picture nomination, as did Clint Eastwood's "Letters from Iwo Jima," the latter of which has won several year-end critics' awards already. Besides "Babel," the other best dramatic picture nominees were "Bobby," "The Departed," "Little Children," and "The Queen." In the comedy/musical category, the best-picture nods went to "Dreamgirls," "Borat," "Thank You For Smoking," "Little Miss Sunshine," and "The Devil Wears Prada."

Madonna is in hot water with PETA after she was spotted wearing a $70,000 chinchilla fur recently, says MSNBC's The Scoop. "Wearing a coat made of dozens of small, gentle animals certainly got Madonna the attention she so desperately craves," said a PETA rep. ... Jenna Bush is not dating an Argentine man, despite his claims. Gonzalez Palazzo told an Argentine magazine that he was dating the blonder Bush twin, but the First Lady's press secretary tells People that Palazzo's lip-flapping is just "wishful thoughts." ... Dolly Parton gave $500,000 to a hospital that honors the country doctor who delivered her, Dr. Robert F. Thomas. "Daddy paid him with a sack of cornmeal," says Parton. "And I've always joked that I've been raking in the dough ever since."