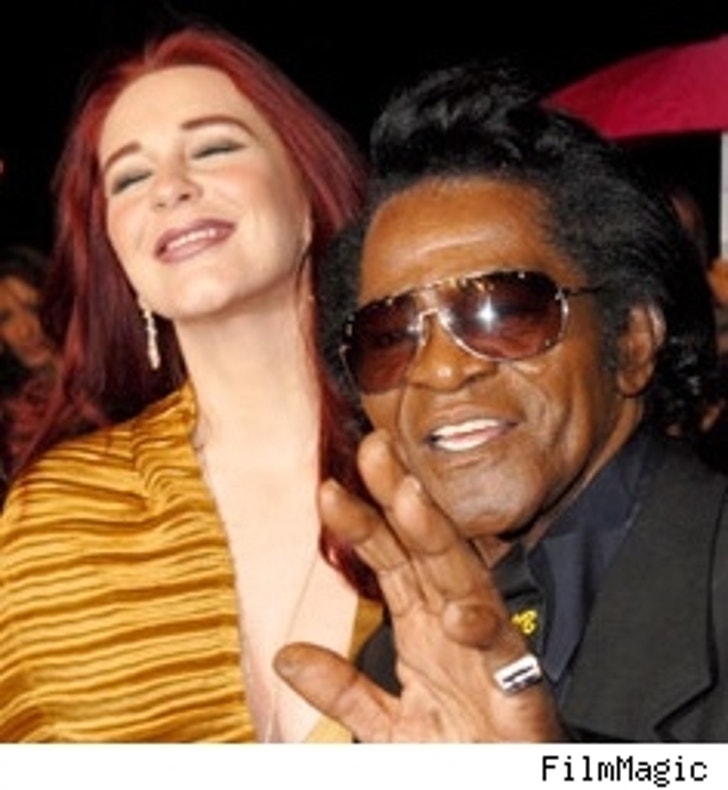 Just hours after losing her legendary husband, the widow of James Brown said that the Godfather of Soul's lawyer and accountant stopped her from entering the Atlanta home she shared with him.

Tomi Rae Brown, who was a backup singer for Brown, told the Associated Press that she was away at a retreat when James died in an Atlanta hospital early Christmas morning. But when she returned to their home, said Brown, her late husband's lawyer and accountant wouldn't let her in. She said she didn't own the deed to the home but claimed a legal right to live there. "I don't have any money," said Brown. "I don't have anywhere to go." It was unclear whether Mrs. Brown was actually living at the home at the time of James' death.

Meanwhile, the Atlanta Journal-Constitution reported that James Brown had been in ill health in the weeks preceding his death, and that a dentist had told him earlier last week that he needed medical attention. The cause of death, according to a Brown rep, was congestive heart failure.

Jordan Actually Plays Wingman, for Once

It looks like Michael Jordan might be playing one role in retirement that he never did on the court – wingman. Last week, as Page Six reports, the basketball legend rang up a $1,000 tab at ever-popular Manhattan eatery, Tao, with former combatants Patrick Ewing and Charles Oakley. As they left, Jordan tried to sweet-talk some women into hanging with the trio at Pink Elephant, where he was on his way to meet that ultimate athlete-Lothario, Derek Jeter. "Jordan was really trying to get this girl to leave with him," says a Post source. "And the girl responded, 'Aren't you married?'" But the full-court press was, apparently, all for the benefit of Jeter and other single pals.

Martha Can't Keep Her Pants Up

Perhaps it's all that baggy prison wear she got used to, or just a spate of waist-expanding holiday partying, but Martha Stewart is having trouble with her trousers. Stewart was in an elevator at a screening the other night, reports Page Six, and said to a friend, "My pants keep coming undone! It's scandalous. I can't seem to keep the top button up." Perhaps realizing the faux pas of admitting such a thing, she quickly changed the subject to – what else – her friend's shoes, and revealed Imelda Marcos-esque proclivities. "You should come over to my place sometime. We are talking thousands of shoes. I have thousands of shoes! It's crazy," she blabbed.

Has this woman ever heard of, like, egg nog, a roaring fire, and some Nat King Cole? Angelina Jolie continued her efforts to make the rest of us feel like overindulged urchins by spending her Christmas Day with Colombian refugee children in Costa Rica. ... Mel Gibson has touted the Native American heritage of the star of his new film "Apocalypto," Rudy Youngblood, but, as Rush and Molloy report, some Native Americans are skeptical of his ethnic cred. Youngblood's manager, Michelle R. Shining Elk, admits that the actor once used his stepfather's surname Gonzalez. But Shining Elk also says that Youngblood is the son of a prominent Comanche. ... Calif. Gov. Arnold Schwarzenegger is scheduled to have surgery today on his right leg, which he broke in a skiing accident. While he's under anesthesia for a few hours, Lt. Gov. Cruz Bustamante will take over for the Governator.