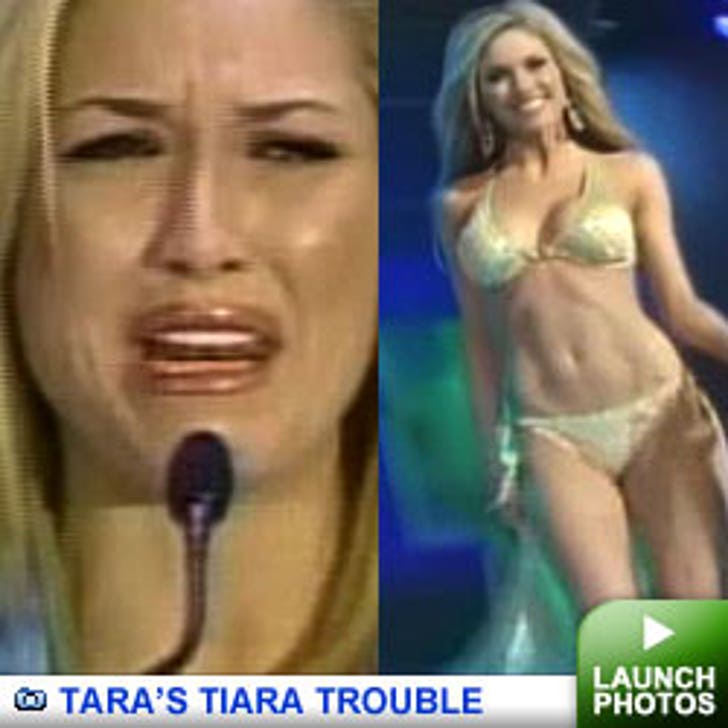 Miss USA Tara Conner finished her stint in rehab yesterday but, contrary to swirling rumors, didn't have a welcome-home bash at the club where she spent many of her notoriously wild nights.

Conner returned to her Trump Place apartment yesterday, says the New York Daily News, and "insiders" say that she'll be resuming public appearances soon. "Right now she's just going to get used to being out" of the Caron Foundation, said one source. Tara successfully avoided what would've been one of the worst PR blunders in history by eschewing a coming-out party at Stereo, the frequent scene of her debauchery. "Tara Conner will not be at ... any party at Stereo," said a pageant rep.

Naomi Throws Another Fit in Brazil

Cellphone-slinging supermodel Naomi Campbell is back to her hissy-fit-throwing ways, this time in Brazil. Campbell, who just pled guilty to assaulting her former maid with a BlackBerry, lashed out at a cameraman at a party on the beach, demanding his film and surrounding him with her girlfriends until he handed it over, report Rush & Molloy. After she got the tape, Naomi locked herself in a room and wouldn't come out. This, despite the fact that she had been visiting a Brazilian "spirit guide" who was trying, presumably, to help her manage her anger, and that she was wearing healing crystals around her neck.

Pamela Anderson is taking on Colonel Sanders, and the Postal Service, which is considering giving Sanders his own stamp. The ex-"Baywatch"-er and PETA advocate has sent off an angry letter to the Postmaster General, reports MSNBC, because KFC has submitted a formal request to have the kindly, bearded Colonel immortalized on a lickable piece of paper. "Honoring a man whose legacy involves breaking animals' bones and scalding animals to death in defeathering tanks is contrary to the values of most compassionate citizens," writes Pam. Most compassionate citizens, yes, Pamela – except the millions that chow down on KFC every day.

Despite Paula Abdul's sometimes woozy approach to judging (and interview-giving), Simon Cowell says he wouldn't do the show without her. "I don't want to work with boring people," he said over the weekend. And, regarding Paula's infamously wacky TV interviews, Simon says, "I've done those satellite interviews so many times, and by the end of it I'm talking complete and utter rubbish." ... Leonardo DiCaprio says it was "disheartening" to be "objectified" after the release of "Titanic," and he wanted to stop acting for a while afterwards. He says he was just seen as "another piece of cute meat." ... Gatecrasher says that Seal and Heidi Klum have big naked photo portraits of themselves and their kids -- on the walls of their house -- taken before Heidi was pregnant with her third kid. "They are tasteful but, you know, confronting," says a source.