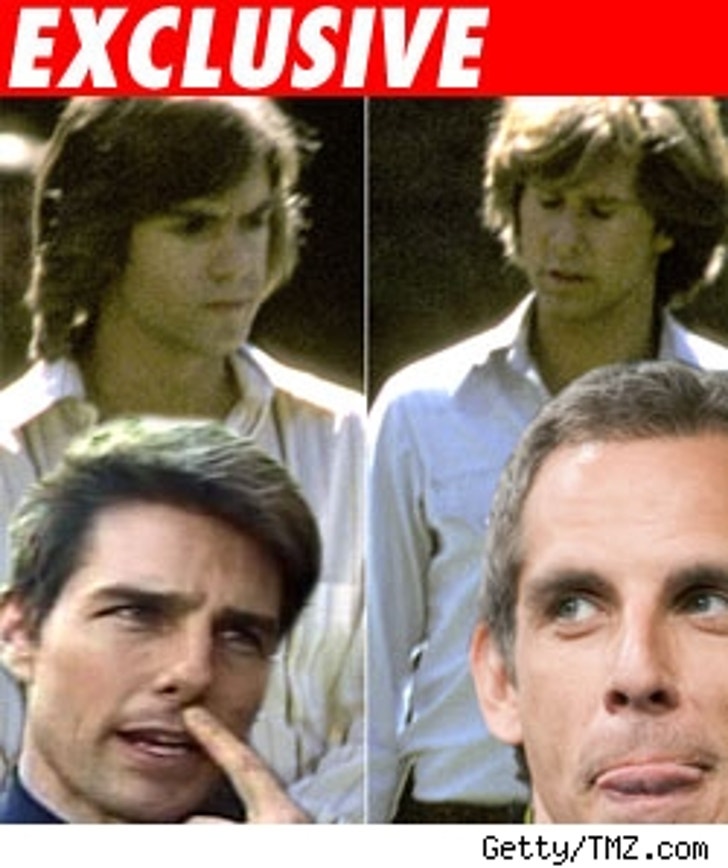 Insiders tell TMZ that Tom Cruise has been talking with Ben Stiller about starring in an updated version of "The Hardy Boys" at Twentieth Century Fox. Tentatively titled "The Hardy Men" -- a comedy that would be directed by Stiller's director on "A Night At the Museum," Shawn Levy ("The Pink Panther," "Cheaper By the Dozen").

"The Hardy Boys" detective novels date back to 1927, though a variety of ghost writers using the pen name of Franklin W. Dixon kept Frank and Joe Hardy perpetual teenagers. "The Hardy Men" would have them finally grown up, but up to their old tricks once more.

While nothing is set in stone, (like, say, that T. Rex skeleton from "Museum") the discussions do reveal a larger, more interesting development stemming from Cruise's L'affaire de sofa d' Oprah: What to do next when your public image has taken a public beating?

For starters: acknowledge the elephant in the room, and make fun of it. People familiar with Cruise's plans say that Cruise met with Stiller about starring in "Tropic Thunder," a farcical action-comedy Stiller has set up at DreamWorks Pictures that paraodies Cruise's work in Paramount's "Mission: Impossible" franchise. It's not clear why Cruise ultimately decided not to "go there" as "Thunder" would have been a way to publically demonstrate that Cruise actually has a sense of humor about his over-the-top antics. Perhaps it seemed simply too risky a financial prospect; in the ten years since its debut, the "Mission: Impossible" franchise has sold $1.4 billion worth of tickets worldwide. That kind of money, even with a franchise at its nadir, is hard to poke fun at when the checks have your name on them.

For now, it appears that Stiller will both play the lead role in and direct "Tropic Thunder." But insiders tell TMZ he hasn't given up on recruiting Cruise into a part that would allow the megastar to poke fun at his super-serious Ethan Hunt alter ego. "The Hardy Men" is primed to go into production come October, and regardless of whether he takes the gig, Cruise clearly sees comedy as a means to redeem both his public persona and the box office crown. Indeed, the fruits of Levy and Stiller's last collaboration are still being savored at Fox, where "A Night at the Museum" is in its seventh week on 3,000 screens, and has grossed $421 million worldwide. Or, put another way, $23 million more than "Mission: Impossible 3."