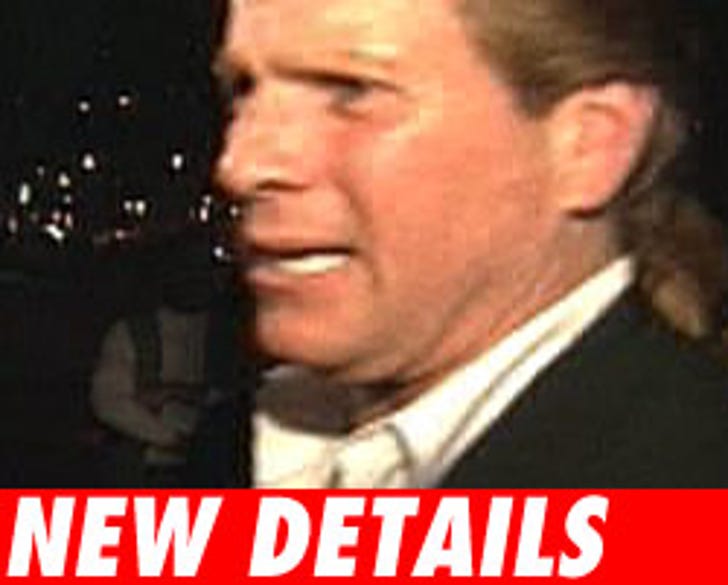 Ryan O'Neal says that it was his son Griffin who instigated the incident that led to Ryan's arrest on suspicion of assault early Saturday morning, as first reported by TMZ. In a statement to TMZ issued by O'Neal's rep, Ryan accuses Griffin of "wildly swinging a fireplace poker" at him, an action that allegedly caused an injury to Griffin's pregnant girlfriend.

O'Neal adds further details in an interview with the Los Angeles Times. He charges that his son grazed him "four or five times" with the fireplace poker and that when he ducked to avoid the swinging weapon, Griffin "hit his own girlfriend in the head." O'Neal adds that he got "nervous" because of the woman's pregnancy. "I fled to my room," he says, "and I got my gun." When Griffin pursued him anew, says Ryan, he fired his gun "into the banister" which scared Griffin into fleeing.

Ryan O'Neal's rep Neil Hassman tells TMZ this morning that Ryan is "back at work" on FOX's "Bones" today and is "extremely sad and upset that this happened. Ryan was acting from a purely DEFENSIVE posture, but that doesn't change the fact that he and his son had a terrible falling out." Neither Griffin nor his girlfriend could be reached for comment.

Father and son O'Neal have tussled before: In 1983, Ryan knocked out two of Griffin's teeth in an altercation. Police were called but no charges filed. Griffin O'Neal was found guilty of reckless boating for his part in the death of Gian-Carlo Coppola, the son of Francis Ford Coppola. He also pleaded no contest to drunk driving in 1989 and no contest in 1992 to charges that he shot at his then-estranged girlfriend's empty car.