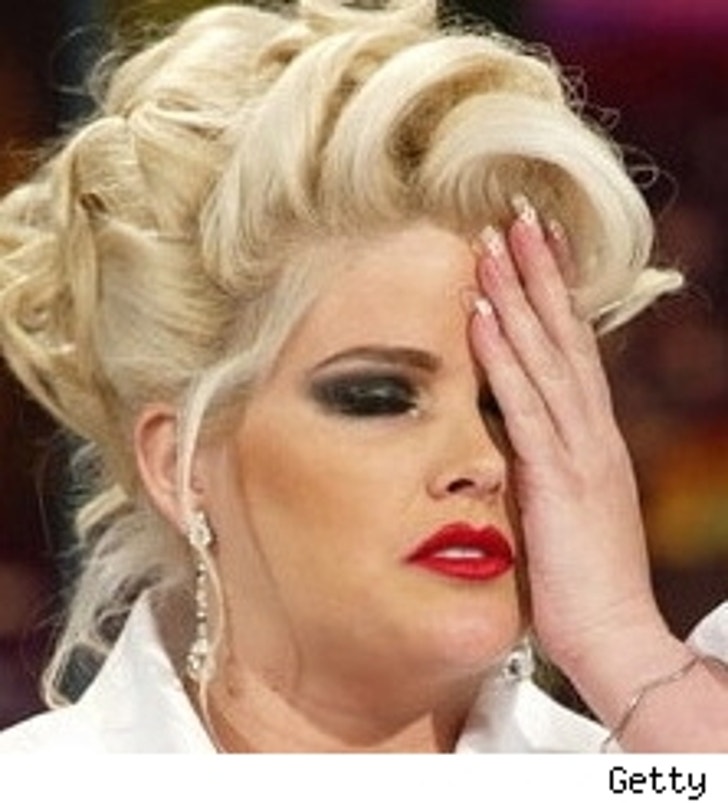 The days leading up to Anna Nicole Smith's death were filled with booze, late-night partying and a hotel room stocked with prescription pills.

According to the New York Daily News, a bouncer from the Hard Rock Hotel says Anna Nicole was wasted early Tuesday morning. "She was messed up. She couldn't walk on her own," he says. "Her bouncer was on one side and her lawyer friend on the other."

And just hours before she died she was seen doing shots at the hotel's Central Bar. A bartender says the blonde bombshell looked "plastered" and was slurring her speech. She then moved the party upstairs, where her room looked like a "pharmacist's shop" allegedly stocked with Xanax, Provigil, Fentanyl and Methadone.

Another Daddy for Dannielynn: A Dead Billionaire

The bombshell was dropped by Anna's half-sister, Donna Hogan, in a manuscript –- aptly titled "Train Wreck" -- she wrote, reports the New York Daily News. She alleges that her deceased sis froze the sperm of her 90-year-old hubby before he died, and used it to become pregnant as a "trump card" in winning the ongoing legal battle for the billionaire's estate.

As the custody battle for Dannielynn heats up, People magazine reports that, despite Anna Nicole's mother touching down on Bahamian soil, the baby is with Howard K. Stern's mother and sister in the Bahamas while the supposed father stays in Florida. "Of course he wants to be with [Dannielynn]," says Smith's lawyer Ron Rale, "but I don't know exactly when he will get there." Before Anna Nicole died, a high-ranking Bahamian official was watching the baby.

Gawkers Can't Get Enough of Anna

In the wake of her death, DVD sales for Anna Nicole's reality show are skyrocketing. Since Thursday, its ranking on Amazon.com has soared an amazing 180,000 percent, moving from number 27,014 to 15.

Britney Spears ditched her bodyguards to party with some friends at hotspot Tenjune. Page Six reports that she was at the club till the wee hours, and had the DJ play four tracks from her upcoming album ... Sharon and Ozzy Osbourne are having a garage sale this weekend, according to IMDB News. They will charge a $10 entrance fee to get into their West Hollywood house, which will benefit the Sharon Osbourne Colon Cancer Program at Cedars-Sinai Medical Center ... Director Gus Van Sant pled no contest to DUII (driving under the influence of intoxicants) and will enter a one-year rehabilitation program, reports the New York Post.