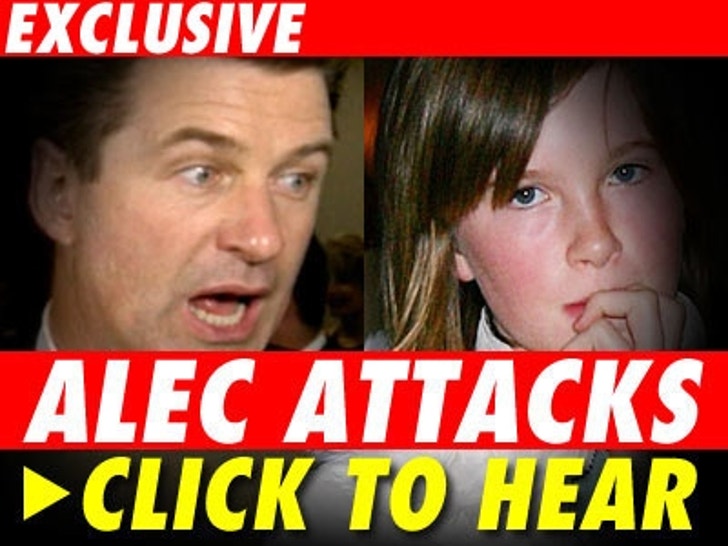 An enraged Alec Baldwin unleashed a volcanic tirade of threats and insults on his 11-year-old daughter, Ireland, calling her a "thoughtless little pig," and bashing her mother Kim Basinger -- and TMZ has obtained the whole thing unfiltered and raw. And we've learned, a family law judge was so alarmed after hearing the tape, she has temporarily barred Baldwin from having any contact with his child. 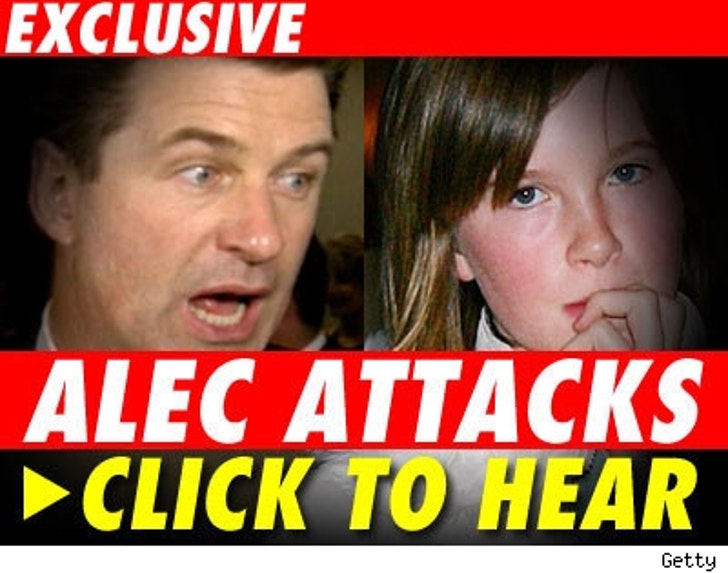 After Ireland failed to answer her father's scheduled morning phone call from New York on April 11, Alec went berserk on her voice mail, saying "Once again, I have made an ass of myself trying to get to a phone," adding, "you have insulted me for the last time."

Switching his train of thought, Baldwin then exercised his incredible parenting skills and took a shot at his ex-wife, declaring, "I don't give a damn that you're 12-years-old or 11-years-old, or a child, or that your mother is a thoughtless pain in the ass who doesn't care about what you do." The irate Baldwin went on to say, "You've made me feel like s**t" and threatened to "straighten your ass out."

"This crap you pull on me with this goddamn phone situation that you would never dream of doing to your mother," screamed Baldwin, "and you do it to me constantly over and over again."

Before hanging up, Baldwin warned the child, "You better be ready Friday the 20th to meet with me." That's tomorrow.

We've learned that on Wednesday, Los Angeles County Superior Court commissioner Maren Nelson heard the tape and temporarily suspended Baldwin's visitation rights. A hearing is set for May 4, where the judge could permanently deny Baldwin visitation or contact with Ireland.

Baldwin's lawyer, Vicki Greene, told TMZ, "Whatever happened yesterday was sealed and confidential. What you're telling me you've got you shouldn't have."

UPDATE: A friend of Alec Baldwin's just contacted TMZ to say that the actor called Ireland last week and apologized for his outburst. The friend added that Ireland is the most important thing in the world to Alec and that he is frustrated because over the last six years, Kim has "tried everything" to alienate Ireland from him.

UPDATE: Alec Baldwin's spokesperson released the following statement to the TV show "EXTRA": "In the best interest of the child, Alec will do what the mother is pathologically incapable of doing ... keeping his mouth shut and obeying the court order. The mother and her lawyer leaked this sealed material in violation of a court order. Although Alec acknowledges that he should have used different language in parenting his child, everyone who knows him privately knows what he has been put through for the past six years."