TMZ sent summer intern Hallie to the MTV Movie Awards for her first big kid assignment. Here's her take on the day's events: 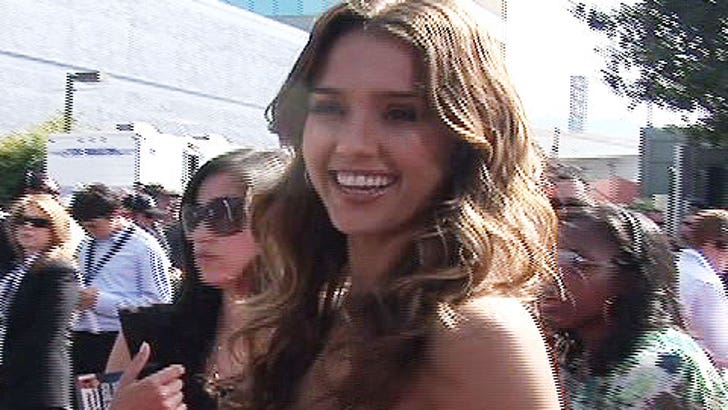 I had to do some detective work on my way here. I knew that the awards show was at the Gibson Amphitheater. I plugged that sucker into my GPS and was on my way. Oops ... forgot about that whole super-tight security thing. Some parking attendants told me that I had to park in a specific parking structure -- Jurassic Parking. Oh, how clever! It was next to impossible to find. I had to ask at least four different people before I was even close. After I parked, I had to go to EB Games in Universal City to pick up my press pass. Keep in mind; this is all new to me! Me with the press? I had a press pass for a concert once, but that's about it. I am still in college for God's sake!

After getting the runaround (surprise, surprise) from a number of Universal Studios employees, I finally made it to the "Bloggers Room" on the back lot of Universal Studios Hollywood. That might sound a lot fancier than it actually is. Technically, I am sitting in a tent with a lot of wires and dim lights. But hey, there is air conditioning and free food!

4:54 PM Who knew that bloggers were actually interesting people?

In the "Blogger's Room" there are people from different websites like iVillage, A Socialite's Life, Popbytes, and LAist. Everyone is really nice and they are giving me an inside scoop. When you think blogger, you think a techie without social skills. These people are far from that. Everyone is very outgoing and friendly. Elina from the LAist is even sharing her flask of SoCo!

The photo room is right next door. Apparently, winners go in there and pose with an award. Maybe I will sneak in and get a peek later. Right now, it is just people stuffing their faces and socializing.

Aww snap. The show is starting!

Dude. Sarah Silverman is 36. Who knew she was so old? But she looks HOT. Girl cleans up NICE.

I love this woman. She is so down to earth and she doesn't give two shits about what anyone thinks of her. Yes, she totally just made fun of famous vaginas.

Of course she is going to mention Paris in her opening monologue. "In a couple of days Paris Hilton is going to jail." They just showed a clip of Paris forcing a toothless smile. I actually feel sorry for her. Sarah is no holds barred. She just reminded everyone that this show is 100% live. Test those censor-ers, girl!

Go Jackie, Jack Nicholson that is! Taking home the award for Best Villain for "The Departed" (aka the Depahted if you are from Beantown). I was rooting for him. I totally even clapped when the Fantastic Four opened the envelope with his name. Okay I am glad he won, but he is not looking too hot. 70 years old and he is still rocking the shades indoors. But he totally dropped the "f-bomb" so I guess we can subtract a decade or so.

Marjorie of MeeVee said that a cameraman on the red carpet said Paris was given the opportunity to be in a more expensive/swanky jail cell. I didn't even know they existed! Only in LA. But she opted to be with the REAL people. Or ... she doesn't want to have the press eat her alive. Her jail sentence has already been lowered. She probably doesn't want to cause another media frenzy.

5:27 PM Where have all the celebrities gone?

A member of the MTV communications staff, Dave, says he is going to do his best to get as many members of the talent to the press tents. There was just an announcement on the loudspeaker that the cast of Fantastic Four is heading over here and everyone should get in their places. I heard some noise in the photog's tent. Who am I kidding? It was nasty photographers SHOUTING and YELLING so they can get the best shot. I don't think I am going to go over there. I don't want to get a black eye. Now Gerard Butler from 300 is on his way.

So I am a vegetarian and I usually would never say this, but girl, eat a steak or something! She needs a big honey baked ham sandwich with a lot of mayonnaise. You also can tell that she has no personality and if it weren't for the teleprompter she would be LOST.

Rihanna's performance of "Umbrella" with Jay Z was not too shabby. Even though that song is constantly on the radio, I still enjoyed the performance. Rihanna has got some great pipes for a 19-year-old. She didn't lip sync and that's always a plus.

Sasha Baron Cohen's accent makes me melt. So sexy. You are still one sexy Brit even though you are totally making out with an overly scruffy Will Ferrell.

Anyone who knows me knows that I love Dane Cook. Like LOVE. I have seen him live twice and basically freaked out when I saw him at The Grove last weekend. But wow. Not liking the short do, Dane. It accentuates the balding and receding that is going on. I don't want to get old.

Sarah changed her outfit and is looking extra cute. She can pull off a baby doll dress like a pro. I don't blame Maxim ranking her #29 on the Hot 100 list of 2007.

Dirtiest Mouth Moment from a movie? How appropriate! Sarah Silverman is hosting! Looks like product placement to me.

Dane Cook is on his way to the press tent. Keep your fingers crossed for me that he will make his way over to me!

John Krasinski just headed over to the press tent. I don't watch "The Office" (even though Steve Carell is amazing) but his new movie "License To Wed" should be cute. I mean it is about time for another Robin Williams movie, right? I have been told he is in the "One-on-One" room next door. I think I will go say hi.

Ya-owzer. Cameron Diaz has legs for days. She presented Mike Myers with the MTV Generation Award. That man is crazy and he has had quite the career. Plus, he has hosted the MTV Movie Awards in the past. But his career ain't over yet! Thank you Saturday Night Live for introducing me to this very silly man. Cam is on her way to the press tent now. This is my question for her, "Cameron! Cameron! How do you feel that about Justin leaving you for me?"

Dane Cook told me that I asked him the best question. WHAT?! I am a fricken college kid! I had been debating for over an hour what I would ask him. I told my MTV buddy Dave that I would love him if he got Dane in here. And he did it!

I asked him which Jessica is a better kisser: Alba or Simpson? He basically gave me some scripted answer. I knew he would, but really -- who cares?! We had a conversation. We had a moment. I got a chance to talk to him face to face. I told him that I saw him at The Grove (yeah, I am creepy) and that we were in the same theatre during "Pirates." One of the trailers was for "Transformers." I had to ask him how that made him feel. For those who aren't aware, he was supposed to be in "Transformers," but at the last minute he backed out. He said it was a little weird, but he only wanted to be in the movie if he could be in a scene with a Transformer and it didn't look like that was going to happen. I told him that I saw him when he performed at the Bank North Pavilion and I wanted to know when he was coming back to Boston. He is currently working on "The Bachelor Too" and when it wraps he is going back on tour. He got mad at me though, because I was too busy blogging and not checking the Sox-Yanks score.

Heidi and Spencer from "The Hills" stopped by. They are currently filming the new season. They will be on "The Hills?" That's kinda weird. I thought that was Lauren Conrad's show and I thought they hated each other. LC and Heidi's relationship is like Paris and Nicole's. It is because of LC that Heidi is famous (if you can even consider her famous) and it is because of Paris that Nicole is who she is.

When asked if Heidi was posing for Playboy, Spencer replied for her and said, "No comment." He babbled about how she would need to be offered 5 million dollars or something. Lisa of A Socialite's Life asked "Where's the ring?" Heidi did a little spirited finger wiggle and she had no rock. Spenser said, "Watch 'The Hills'!" Tease.

Overall, this was a great experience and I am so lucky. I am an intern. I am supposed to be writing down lunch orders and getting people coffee. I got to hang out on some super comfy couches with some really awesome people. Oh yeah. I got to interview Dane Cook. I can now leave L.A. happy.