No that's not a wig ... Kelly Osbourne's hair is now pink. Kinda like mom! 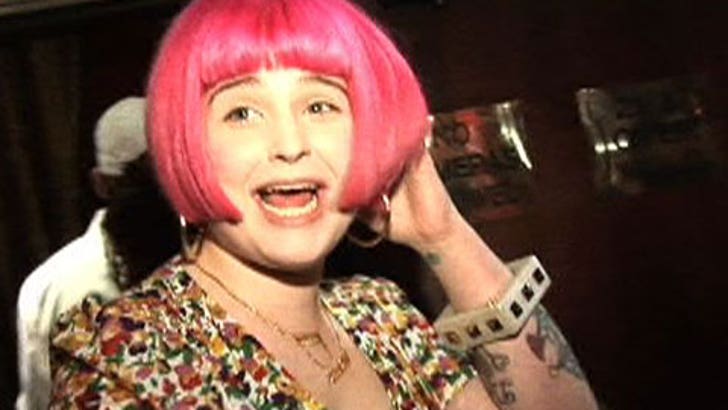 TMZ spotted Ozzy's daughter trotting into Hyde last night, premiering her new Manic Panic-inspired locks. And proving that even Young Hollywood gets carded at the door, Osbourne had to show her passport to get past the velvet rope.

Hilary Duff was looking absolutely fantastic, with sister Haylie in tow at the afterparty for the premiere of "1408," Hilary told our cameras that the movie was "terrifying." Samuel L. Jackson, who's in the Stephen King flick, was at the party as well -- and on his way out, he refused to sign for autograph hunters.

Across the country in NYC, Nick 'n 'Ness were spotted leaving the Hotel Gansevoort, with Vanessa telling her man she was feeling a bit sick. Sarah Jessica Parker was silent when spotted on the street, but Vanessa Williams chatted to TMZ cameras outside of "Live with Regis & Kelly" about Paris Hilton's incarceration.

Also out: a swarmed Enrique Iglesias, an energetic Vince Vaughn at the Saddle Ranch and Rachel Hunter, who made a quick dash out of Mr. Chow.

All this and more in today's big pink edition of Star Catcher.