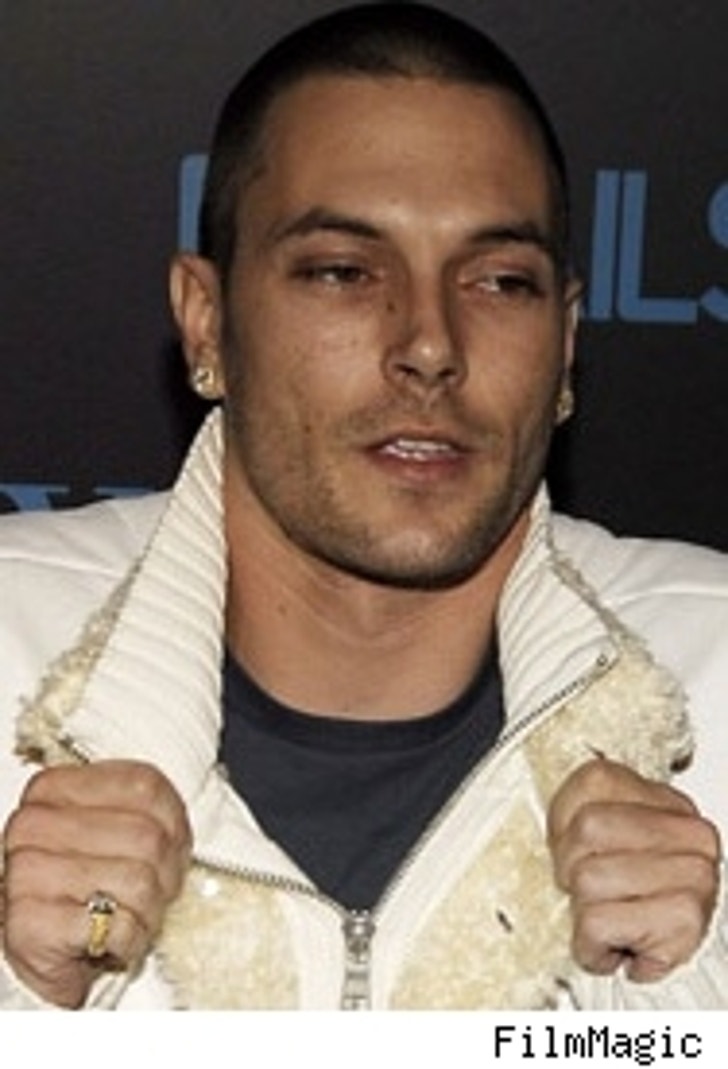 Kevin Federline's so serious about getting custody of his Britboys that he actually hired an ex-Israeli commando to serve Britney's cousin-assistant Alli Sims and former boytoy J.R. Rotem with papers.

The New York Daily News reports that Aaron Cohen, described as a "security expert," was dispatched by the K-lawyer Mark Vincent Kaplan to hunt down Sims and Rotem while they partied at a Hollywood Hills soiree at 2:30 am – while Britney played inside. "Cohen knows his stuff," says a source to the News. "If Alli were a terrorist, she would have been taken down."

Francis to Hef – Get My Back, Biatch!

"Girls Gone Wild" porntrepreneur Joe Francis is whining that he's been "forgotten" by Playboy tycoon Hugh Hefner, even though he claims to be in a similar legal pickle that Hef found himself more than four decades ago.

"It's sad how quickly [Hef] forgets," says Joe to Page Six, while he whiles away his days in Washoe County Jail in Reno, Nev., unable to leave for fear of getting picked up by Florida authorities. Hef, of course, was arrested back in 1963 on obscenity charges for publishing pictures of Jayne Mansfield.

Hef, for his part, told Larry King back in May, "I'm not a fan, because I think it's [exploitative], and I don't think he's a very nice guy."

David Beckham – the L.A. Galaxy's $50 million man -- has played a grand total of 18 out of 270 minutes in his first two official games in the MLS, and it looks like his debut in the U.S.' biggest market – New York – might be a big dud as well.

Becks' gimpy left ankle "swelled up" on the flight out east, says the Daily News, which is why he sat out last night's match against the New England Revolution. But the 50,000 New York fans who have bought tickets for the Galaxy's match this Saturday might have an unpleasant surprise in store if that ankle doesn't heal up.

Oprah, meet Magic. Barack Obama might have the support of Oprah Winfrey, but Magic Johnson's going to bat – or the rack? -- for Hillary Clinton, says the L.A. Times. He's going to be hosting a fundraiser for her at his pad on Sept. 14, just six days after Oprah's for Hillary. ... Lory Del Santo – the mother of Eric Clapton's son Conor, who fell to his death from a New York high-rise – says she had a dalliance with George Harrison just three months after Conor died, poignant since guitar god Clapton stole Harrison's wife Patti Boyd decades before. ... "Rush Hour 3" made $50 million at the box office this weekend, topping Jason Bourne's $33 million take. Brett Ratner reigns. We weep.