The Monte Carlo Hotel in Las Vegas is on fire -- looks like about four stories from the roof down are toast. The fire may have started in one of the luxury suites on the 32nd floor, and has burned to the 24th floor. No reports of injuries yet. Traffic is snarled on the strip. 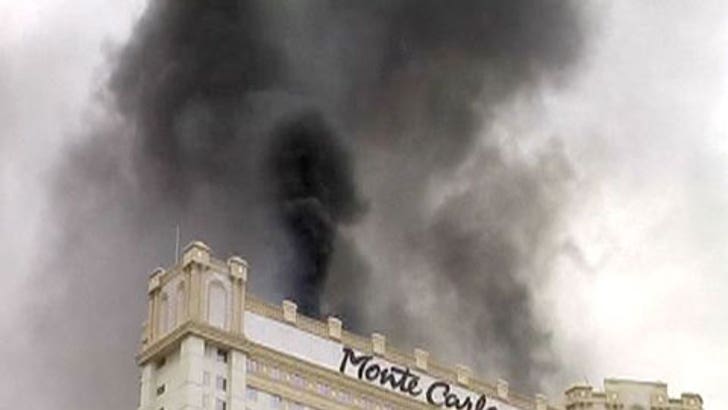 A fire spokesman said the fast-spreading blaze started around 11:00 AM PT. The hotel has more than 3,000 rooms -- minus a few now. The 35-story hotel is situated between New York, New York and the Bellagio. Firemen are battling the blaze from the roof, where four workers are trapped, according to FOX News. Guests are being evacuated to the MGM Grand, which was the name of the hotel that burned in 1980 (which is now Bally's).

AP is reporting that the fire started on the roof of the hotel, which opened in 1996, at a cost of $344 million. As of 11:52 AM PT, there are not reports of anyone trapped inside the hotel.

In a spectacular achievement in both construction and firefighting -- this fire seems to have been brought under control inside of an hour.