Uma Thurman is on the witness stand as we type, and we're getting constant updates from inside the courtroom, where she's having to face her creeperrific alleged stalker -- who nixed a plea deal in the case because he wanted to glimpse her again. 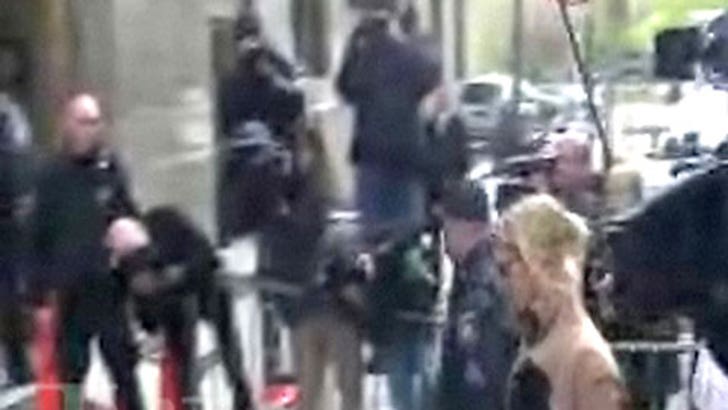 She's wearing black pants and a black shirt, wearing little or no makeup and her hair's "tousled." According to our spy, she's "very uncomfortable" up there, speaking very quietly and nervously. Her voice cracked when she talked about her kids.

As for Jack Jordan, her alleged stalker -- he's sitting quietly, with his hands folded in front of his mouth. Uma won't even look at him or in his lawyer's direction.

UPDATE 3:28 ET: That was fast: defense attorney George Vomvolakis didn't have much for Uma, and now she's finished! The only time Jordan looked up at her was right at the very end.

UPDATE 3:02 ET:
Uma put on a lil' makeup and a black jacket -- girl was cold! She just told the court how she was "afraid for her life" when he showed up on the steps of her house.

UPDATE 1:00 ET: Lunchtime -- she may or may not come out, and Jordan's been known to take smoke breaks. So we'll be watching.

UPDATE 12:42 ET: Uma's getting visibly angry reading an email from Weirdo talking about being put into the loony bin -- and Jordan's just slouched, with his head on his right hand. The jury's rapt.

UPDATE 12:21 ET: It gets creepier: Uma says Jordan made scary claims about her having had an abortion -- not true. She says she didn't want a restraining order because she didn't want to aggravate the situation and because it's "a piece of paper that can be broken."

UPDATE 11:53 ET: The prosecution is still doing their questioning and they're on a short recess.

UPDATE 11:30 ET: Jack Jordan wanted his chance to see her again, but apparently he's looking straight ahead, and he's keeping his head down a lot too. Uma just said that when she got super-skeeved when she found out that he called her bro, mom, and dad.

UPDATE 11:22 ET: She's being questioned about an incident in which Jordan tried to get into her trailer on the set of "My Super Ex-Girlfriend" and she can't even look at the ADA who's questioning her. She says she was "completely freaked out" and "felt sick" about the incident.

UPDATE 11:11 ET: How's this for unbelievably uncomfortable: Uma just read from a creepy Empire State Building postcard that Jordan gave her, and her hands are shaking like mad.