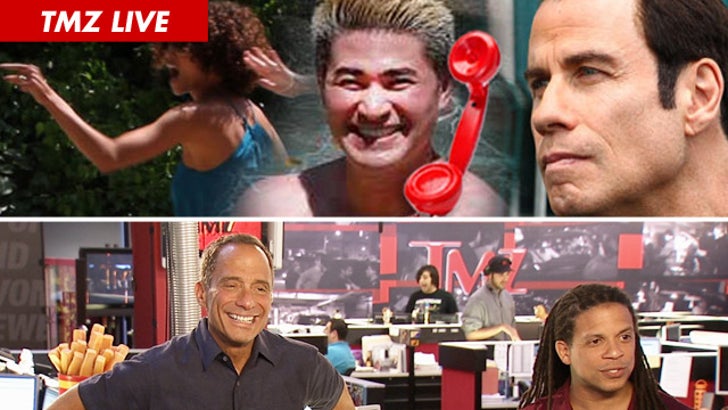 Halle Berry is one angry mama bear -- screaming at an independent photographer outside Nahla's school. We think Halle has good reason to be pissed ... we'll show you what went down.
Plus, pregnant man Thomas Beattie calls in about the videotape of his estranged wife attacking him. Also, a John Travolta eyewitness -- the woman who dressed him Jan. 16 in NYC ... the same day the alleged sexual battery happened. You gotta hear why she's speaking out.

(0:00) A major witness in the John Travolta case comes forward -- we talk to the costume designer that can place JT in NYC on the day of the sexual harassment allegations.
(6:07) George Clooney's shindig for President Obama is in full force -- we have photos of all the action going on outside Clooney's L.A. home ... including food, drinks ... and guard dogs.
(10:40) Halle Berry goes nuclear on a photographer (not ours) who was taking photos of her at her daughter's school ... and we're totally on her side.
(15:15) Rihanna FINALLY cuts ties with Chris Brown -- and it's all over a diss song that seems to be aimed at her.
(18:50) We obtained shocking video of the Thomas Beatie -- aka the Pregnant Man -- being attacked by his wife ... and that's just the beginning. Thomas calls in to explain what caused it to happen.
(28:10) Hillary Clinton's likability factor goes through the roof -- after she went to an event wearing no makeup ... then laughed it all of in an interview. Is she becoming the perfect candidate for Obama's VP?
(33:05) It looks like Britney Spears is going to be a judge on "The X Factor."
(37:12) The most ridiculous TIME magazine cover ever -- of a super hot mom letting her 3-year-old son breast feeding.
(40:00) Bristol Palin rips President Obama for supporting gay marriage -- does the unwed 21-year-old mother have any room to talk?
(42:12) We take your calls!