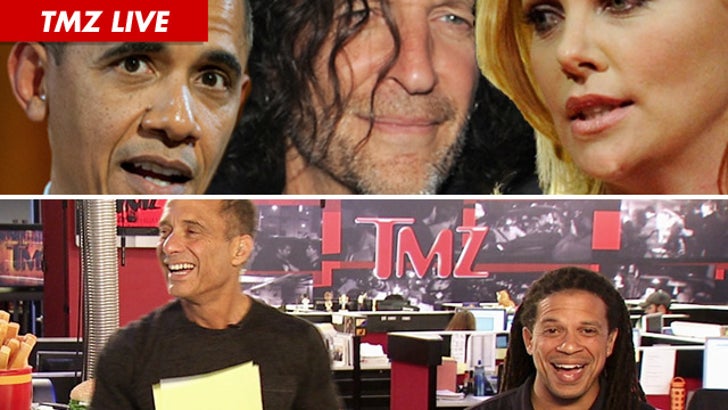 George Clooney's fundraiser for Prez Obama was a huge success -- financially ... but some celebs ain't talking about what happened inside. Hmm ... Luckily, we have all the details about what went down .. including the $40,000/plate menu!
Plus, Howard Stern's verbal assault on Britney Spears -- was it actually a major plug for "X-Factor"? Also ... Charlize Theron and the TMZ TV story we decided to pull. Did we make the right decision?

(0:00) We know what happened inside George Clooney's extravagant dinner for President Barack Obama ... and why some guests are actually disappointed with it.
(6:50) Breaking news -- the jurors deciding Williams Balfour's fate couldn't seem to make a decision ... until they realized it was Friday and they wanted to get it over with before the weekend started.
(8:40) Somebody left Clooney's party in a huff ... and his name rhymes with Willy Pistol.
(10:35) Howard Stern rips Britney Spears for joining "The X Factor" -- and he couldn't be more right about it.
(16:40) Fascinating turn the John Travolta masseur case ... one of the accuser was DROPPED by the attorney.
(20:20) Kris Humphries pokes fun at himself in a Funny Or Die video. Thomas calls in to explain what caused it to happen.
(23:10) Stevie Wonder is the victim of an alleged extortion plot ... and it's crazy.
(26:30) The legal war between the actress in Michael Jackson's "Thriller" and MJ's estate is over.
(29:55) Whitney Houston's family is getting a reality show -- to show how they're coping with her death. Too soon?
(31:00) The TMZ TV package you'll never see.
(36:00) Jennifer Lopez is going on the road ... and she wants to take the kids with her.
(38:40) Serena Williams is ... a rapper now! You gotta hear this.
(41:12) We take your calls!