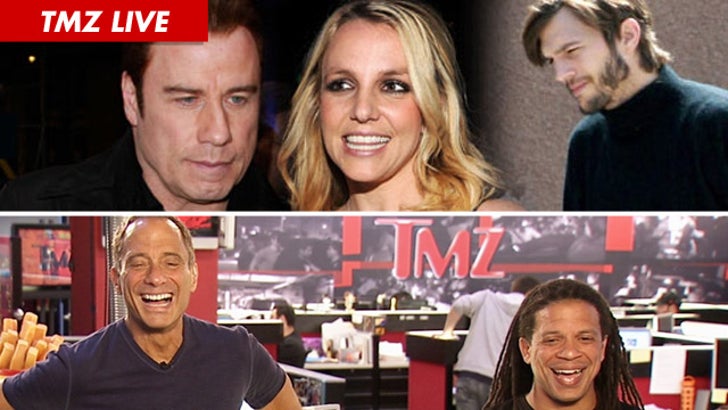 John Travolta allegedly demanded a massage from a cruise ship employee ... and we have details from the incident report. Two questions: is this just someone jumping on sue Travolta bandwagon -- and JT slums it on cruise ships??
Plus, Britney Spears makes it official as a judge on "The X Factor" --now everyone's wondering if she can hold it together on TV. Also, does Ashton Kutcher have the chops to play Steve Jobs -- and pre-gaming with Pauly D ... whatever that means!

(0:00) John Travolta has now been accused of sexual harassment by a THIRD man -- we have video of the alleged victims claims.
(5:19) Britney Spears finally signs on to judge on "The X Factor" -- is she really up for the task?
(8:50) Patrick Dempsey is in a major pickle -- two dogs he rescued won't stop fighting ... so he has to get rid of one.
(17:40) The transgender that sued Khloe Kardashian over an alleged bar fight has named him price ... $150k. Plus ... classic TMZ video of him in a really hairy situation.
(20:10) Pauly D is about to rake in even more money for a brand of "pre-game" vodkas. Now if only people could understand what pre-gaming means.
(23:00) Ashton Kutcher has the looks to play Steve Jobs ... but does he have the acting chops?
(24:30) Arnold Schwarzenegger hangs out with Mariah Schriver on Mother's Day ... Harvey thinks a reconciliation us still on the table.
(27:45) Kim Kardashian and Kanye West get caught smooching all over town -- and a lot of people still think this is one big publicity stunt.
(33:00) The Queen's panties are up for sale on eBay ... and they're huge.
(34:55) Newsweek is the latest magazine to beg for attention -- by calling President Obama the "First Gay President."
(39:22) Dr. Phil put ONE of his mansions on sale ... we have photos of it ... plus pics of his massive estate that you gotta see.
(41:20) We take your calls!