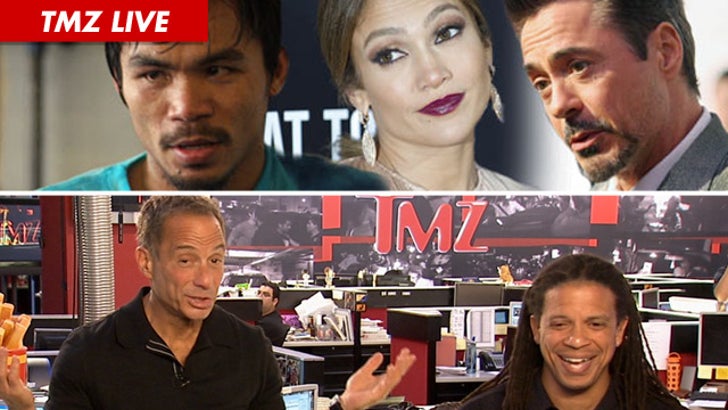 Manny Pacquiao claims a reporter twisted his words to spark the whole gay marriage controversy -- but we're taking a close look at what Manny actually said ... and looks like the reporter wasn't that off base. And here's a good question: doesn't Manny have the right to his opinion, anyway?

Plus, Jennifer Lopez leaving "American Idol" -- possible, but we'll tell you why it's not likely. Also, Robert Downey Jr.'s amazing $50 million comeback, and WHY is Kris Jenner torturing her own daughter?!!

(0:00) Breaking news -- Robert Kennedy Jr.'s estranged wife was found dead -- we have all the exclusive details.
(2:20) Manny Pacquiao says he doesn't want gays to die ... he just wants them to not have the right to marry each other.
(6:30) Sketchers' Shape-Ups shoes -- which Kim Kardashian endorsed -- are a load of BS ... but Kim is backing them anyway.
(13:20) Jennifer Lopez is acting like she doesn't want to do a third season of "Idol" ... but we think it's just a negotiation ploy.
(18:30) Hilarious photo of Dr. Oz that you have to see -- and it involves a major bulge in his britches.
(20:30) Tiger Woods' main mistress Rachel Uchitel just had a baby! And it's not Tiger's.
(22:35) "Terminator 3" star Nick Stahl goes missing -- and his wife thinks he fell off the wagon.
(25:10) Jason Biggs and his wife Tweet the funniest picture -- mocking TIME magazine's infamous breast feeding mom cover photo.
(26:40) John Mayer reveals he took time away from the spotlight because he went a little crazy. We bust out a classic clip of John you gotta see.
(30:30) Kris Jenner is still entertaining people who think Khloe isn't her kid ... and it's ridiculous.
(33:00) Robert Downey Jr. is going to make an astounding $50 mil off "The Avengers" -- cementing his place as the best turnaround is Hollywood history.
(35:20) Halle Berry says she's going to call President Obama in order to get stricter laws on paps. We're sure he has time for that.
(40:00) Suge Knight just won't let Tupac rest in peace ... calling the slain rapper a huge homophobe.
(42:10) We take your calls!