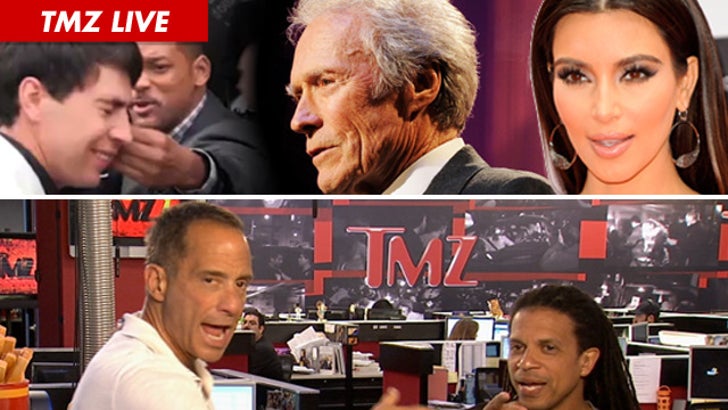 Will Smith delivered the slap heard 'round Russia after a reporter tried to kiss him -- sparking a huge debate: did Will overreact or was he justified? Someone in the newsroom thinks he should have punched the guy!
Plus, Clint Eastwood's wife and kids are trying to turn him into a Kardashian! At least that's Harvey's take on their new reality show. Speaking of Kim Kardashian ... is she really a bigger star than Kanye West? Ugghh ...

(0:00) Will Smith bitch slaps a reporter in Russia who tried to lay a wet one on him -- some people in the newsroom think he went to far ... others think he didn't go far enough.
(9:46) Facebook hits Wall Street -- and makes billionaires and millionaires out of a whole bunch of nerds. (13:00) "American Idol" finalist Phillip Phillips is one tough cookie -- he's postponing surgery for chronic kidney stones until after the show is over.
(19:00) Donna Summer blames the September 11 attack for her lung cancer.
(22:20) David Letterman and Conan O'Brien take shots at Jay Leno while reminiscing over the "Tonight Show" fiasco.
(24:30) Harvey can't stand the reality show based on Clint Eastwood's wife ... but not everyone agrees..
(30:30) Is Kim Kardashian really a bigger star than Kanye West?
(34:10) Sarah Jessica Parker is the new George Clooney ... at least in President Obama's eyes.
(36:15) "50 shades of Grey" sparks huge sales ... in sex toys.
(40:10) Did Gloria Allred break any laws when she swooped up the John Does accusing John Travolta of sexual harassment?
(43:40) We take your calls!