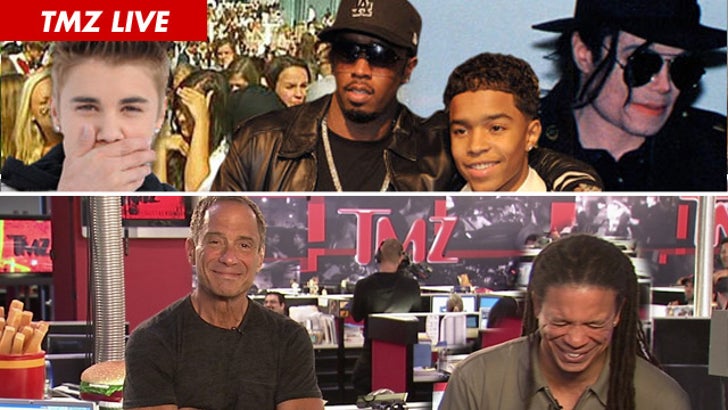 Justin Bieber is bigger than the Nobel Prize! At least in Oslo, Norway where he sparked panic and chaos with a surprise concert. We got Bieber's manager Scooter Braun on the line ... live from the scene. Yeah, our long distance bill's going through the roof.
Plus, Diddy's son earned a full-ride scholarship to play football at UCLA! But should his multi-millionaire dad foot the bill ... so a more needy kid can get an education? Also, Michael Jackson's ominous letter ... foreshadowing his death.

(0:00) Justin Bieber creates a STATE OF EMERGENCY in Norway.

(6:16) Dominic Monaghan doesn't feel too fondly toward one of his former 'LOST' co-stars.

(9:27) Zillionaire Diddy's son has a full scholarship to play football for a major university... though we're pretty sure he can afford it.

(15:10) With Facebook stock on the decline, "poor" Mark Zuckerberg has lost BILLIONS... but is that an excuse NOT TO TIP?

(18:25) A North Carolina church has stooped to a new low... using TODDLERS to preach against homosexuality.

(23:31) An ominous Michael Jackson collectible is pulled off the auction block, but sheds light on what ailed the late King of Pop.

(26:43) Looking for a job? Kathie Lee Gifford may soon be in the market for a new fact checker.

(30:24) Ray J gets sued over some clothes he left in an historic hotel room, but whaddya know... He found 'em!

(32:56) Mitt Romney wants your vote this November... as long as there are no spelling bees involved.

(37:58) As if her house burning down weren't enough, Kat Von D gets the short end of the stick from her insurance company.