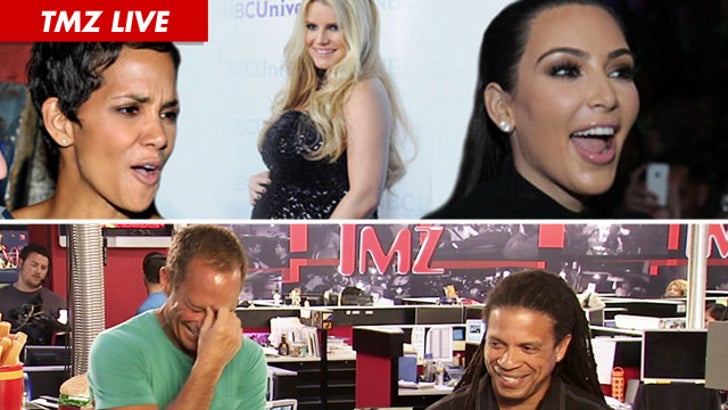 Halle Berry's secret weapon in her custody war with Gabriel Aubry might be the paparazzo she exploded on a few weeks ago. We'll explain how the photog could help move Nahla to France.
Plus, our Jessica Simpson conspiracy theory catches fire! Did she pack on extra pounds to make a deal with Weight Watchers? Lots of people believe it ... how 'bout you?
And Harvey reveals the secret to Kim Kardashian and Kanye West's relationship ... which might explain why they're already gearing up to move in with each other.

(0:00) Breaking news -- John Edwards dodged a huge bullet in his court case today ... but he's not out of the woods yet.
(2:02) Halle Berry may have the unlikeliest of allies in her custody case against ex Gabriel Aubrey ... the paparazzo she EXPLODED ON on a few weeks ago.
(10:35) Kim Kardashian and Kanye West are selling their L.A. homes because they're gearing up to LIVE WITH EACH OTHER ... and Harvey knows a little secret about their relationship.
(16:45) Phillip Phillips isn't letting his horribly painful kidney stones hold him down ... because his debut single is outselling every past "Idol" contestant except Kelly Clarkson.
(19:01) Smooth move ... Harvey accidentally exposes Max's computer password.
(21:10) Oslo, Norway nearly falls to an army of teenage girls ... thanks to the one and only Justin Bieber.
(25:50) Harvey called it five months ago -- post-preggers Jessica Simpson has joined forces with Weight Watchers ... and we debut what is quite possible our most ridiculous conspiracy theory yet?
(32:50) Maybe we're reading between the lines ... maybe not ... but it seems like Matt Lauer is ready to give someone on "Today" the boot.
(37:00) The latest Justin Bieber app ... is pretty terrible. See for yourself.
(39:30) Matthew Fox is in the clear over those nasty assault allegations ... but something doesn't add up.
(41:15) We take your calls!