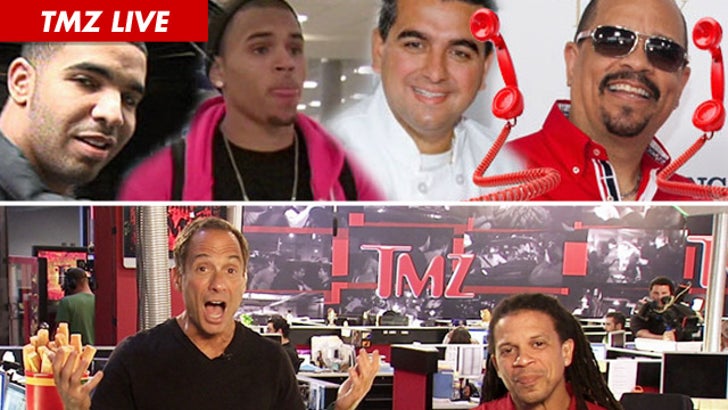 Chris Brown and Drake's nightclub brawl started brewing weeks ago -- as a Twitter war over Rihanna!! That's just one juicy detail we got straight from club insiders ... who saw how it all went down.
Plus, "Cake Boss" Buddy Valastro calls in to offer a mea culpa for his transgender prank gone wrong -- and presidential politics with Ice-T. He says Prez. Obama couldn't have won the White House without 25 years of hip-hop ... but Harv disagrees. Challenge!

(0:00) Chris Brown and Drake are involved a bloody, bottle-breaking brawl at a club in NYC -- we have photos of the destruction and the injuries ... and well as exclusive information about what it was about and how it went down.
(9:20) We have the first images from Octomom's self-pleasure video -- so you're welcome ... or we're really sorry.
(14:10) "Cake Boss" Buddy Valastro calls in to set the record straight about a controversial episode that just aired -- in which they prank a cast member into hitting on a transgender.
(18:40) We Skype with a goose named 50 Cent -- seriously -- who was given that name after being shot seven times and surviving.
(20:30) Maria Shriver gets stoned ... but not the way you're thinking.
(23:30) Ice-T calls in to explain his theory that hip-hop helped paved the way ... for Barack Obama to become president.
(29:15) "House Hunters" is accused of being fake -- we talk to HGTV's programming executive to see who's telling the truth.
(33:00) Floyd Mayweather tries to cry his way out of a jail sentence ... but thankfully his super hot female judge didn't listen to his whining.
(37:35) "Basketball Wives" cleans house after being heavily criticized for portraying Black women in a poor light. So who go the ax?
(40:25) We take your calls!