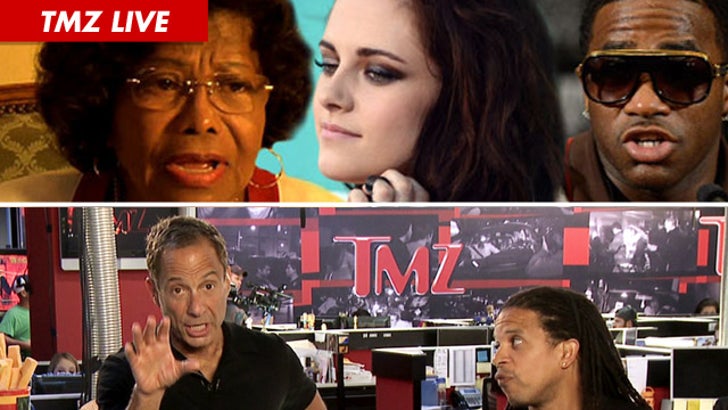 Katherine Jackson's been removed as guardian of Michael Jackson's children -- and now T.J. Jackson is in charge -- but for how long? After a crazy day in court ... we'll tell you why this Jackson family feud is just getting started ... and yes, it DOES involve money.
Plus, did Kristen Stewart own up to cheating on Robert Pattinson because she's genuinely sorry ... or just because she got caught? Of course, there's already a juicy conspiracy theory brewing!
And you gotta see boxer Adrien Broner's post-fight celebration -- it's either hysterical or humiliating (to his gf) ... or both!

(0:00) The Jackson family drama gets crazier by the minute -- we'll tell you all the latest on the war that's tearing the family apart.
(12:00) The "Batman" shooting could have been completely avoided -- because the shooter sent his plans to someone in the mail ... but they never got the package. Plus, Christian Bale visits the victims.
(16:00) The paparazzo who chased Justin Bieber is being charged with four crimes ... and Evan thinks he's the dumbest guy ever.
(20:00) Kristen Stewart actually admits to cheating on Robert Pattinson -- we'll tell you the story behind why she confirmed the scandalous story.
(26:00) Russell Brand could be a little trouble -- we found out he's going to be charged for taking someone's cell phone and smashing it.
(29:00) A Greek Olympian tweets out what seems to be a racist statement -- and gets kicked out of the games.
(32:00) Carly Rae Jepson has nude photos on the market -- we'll tell you how they got there.
(34:00) Bruce Springsteen was at one point suicidal ... shocking.
(36:00) A pro boxer pulls one of the most ridiculous stunts ever -- fake proposing to his girlfriend in the ring, then making her brush his hair.
(38:00) We take your calls!