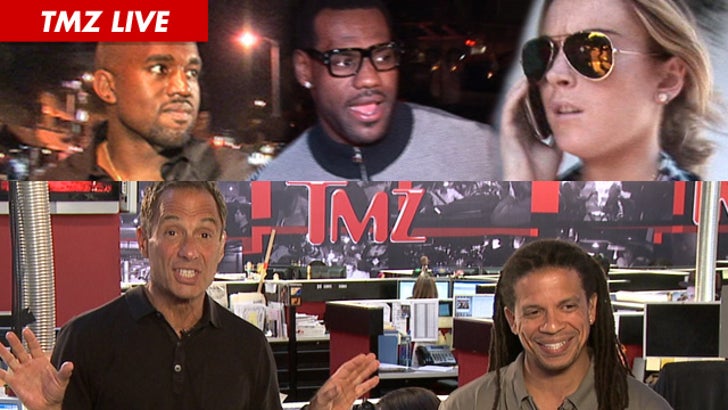 Kanye West, Nicki Minaj and Mariah Carey would give "American Idol" the most star studded -- and expensive -- TV judge panel ever ... but will it work with 3 huge egos?? It could be awesome ... or an awesome implosion. We'll discuss.
Plus, you buying LeBron James' new Nike sneakers for $315? Harvey's outraged, but Evan says they're works of art!
Also, how did Lindsay Lohan end up on the scene of a crime -- again?!! Wait till you hear what was going on inside the all-night rager ... before police showed up.

00:00 - BREAKING NEWS: At long last, Kelly Ripa has found her replacement for Regis!

2:31 - Mariah Carey is none too pleased as Nicki Minaj and Kanye West emerge as new 'American Idol' judging candidates.

10:19 - Contrary to some reports, a key detail emerges surrounding the suicide of director Tony Scott.

13:51 - You'll never believe who police are questioning in connection with another Hollywood jewelry heist! (Hint: It rhymes with "Schmindsay Schmohan.")

17:10 - Amanda Bynes gets in yet ANOTHER car accident.

18:19 - It's been over a year since Osama bin Laden was killed, but now ANYONE can relive the historic Navy SEAL mission.

22:59 - Illinois strip clubs will soon face a "stiff" new tax-- Senator Toi Hutchinson calls in to tell us it's for a good cause.

26:23 - Embroiled in a bitter custody battle, Usher is held in contempt of court... FOR WHAT?!

32:47 - LeBron James has a new shoe coming out, but their king-sized price tag may have some fans choking.

37:07 - Congressman Kevin Yoder took a dip in his birthday suit in Israel... Did he really need to apologize, though?

38:09 - 'Paranorman' breaks new ground for animated kids' movies, but should parents be warned?