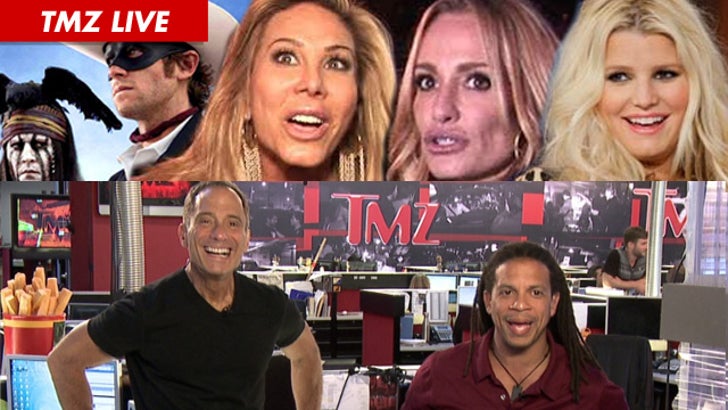 The death of a scuba diver on the set of "The Lone Ranger" -- we broke the story, and now we're uncovering new details about the tragedy ... which is the latest in a string of setbacks during filming of Johnny Depp and Armie Hammer's new movie.
Plus, Adrienne Maloof's divorce takes another nasty turn -- and her 'Real Housewives' co-stars are choosing sides. Taylor Armstrong calls in to reveal what she's seen going on between Adrienne, Dr. Paul Nassif ... and their kids.
Also, no one's cutting Jessica Simpson a break after she's brave enough to put on some Daisy Dukes! What's a girl gotta do?

3:53 - Lindsay Lohan finds an interesting new use for a toddler. (No, not as her driver.)

10:08 - Could a shocking revelation involving Mitt Romney's son take some wind out of his campaign's sails?

14:59 - Paris Hilton offers up an apology for her homophobic remarks. Are you buying it?

24:25 - Amanda Bynes has been dropping the ball left and right these days, but now the troubled star finds herself being dropped... by her PR team.

33:25 - 'Dancing with the Stars' will be one dancer short after this coming season, as Maksim Chmerkovskiy decides to paso doble into the sunset.

37:53 - In case you're looking, Vanessa Bryant is ready to unload one of the three mansions Kobe gave her.