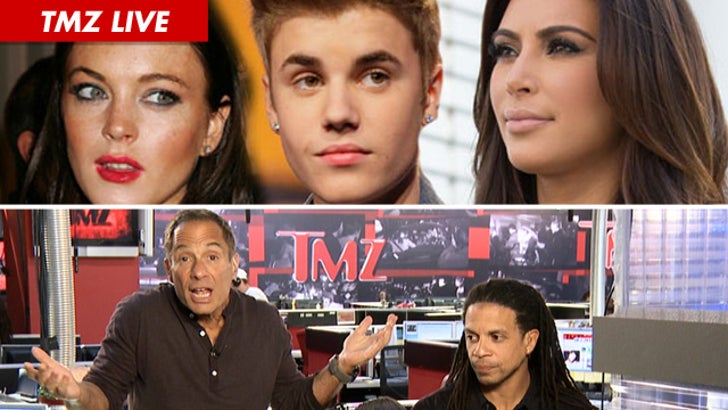 Lindsay Lohan dodges another bullet -- for now -- we'll tell you why she won the judge lottery ... and how she's more likely to end up in counseling than behind bars ... despite having her probation revoked today.
Plus, Justin Bieber targeted in a NYC murder plot? Who hates JB that much? You gotta hear how cops say this scheme was hatched.
And, Kim Kardashian is losing her mojo -- she dropped from 8th place to 98th place on a "Most Desirable Woman" list ... in just one year. What happened?

(0:00) Lindsay Lohan may have lucked out yet again -- her probation case is being heard by a judge who we found out doesn't like to lock up addicts. We'll give you the over/under on wether LiLo will end up in counseling instead of behind bars.
(6:10) This is beyond crazy -- a convicted murdered allegedly plotted to kill Justin Bieber ... and the murder involved castration. You won't believe how the guys who were allegedly hired to kill the Biebs got caught.
(10:00) Here's a look inside how we report stories -- we'll tell you how Sarah Jessica Parker and the people from the Nobel Peace Prize both handled the story we broke ... about someone in SJP's entourage allegedly shoplift sunglasses from an airport in Norway.
(14:00) Kim Kardashian fell 90 places in a "Most Desirable Woman" poll ... in ONE YEAR. What happened?
(18:00) The rapper who Coco was snuggling up on (pissing off her hubby Ice-T in the process) went back out in Vegas ... and was all over a bunch more women.
(21:00) Brooke Mueller's house was turned upside down by Child Protective Services in the wake of her 19th trip to rehab. We'll tell you why we think Denise Richards is going to have Brooke's kids for a long time.
(24:00) Casey Anthony resurfaces in Florida ... and doesn't try to hide it.
(28:00) Barbara Walters asks Gov. Chris Christie why he's so fat ... and if a person his size can take the physical strain of being POTUS.
(31:00) In a shocking move ... Ariel Winter's father was given control of her estate.
(34:15) Dogs can drive! Sort of. And we have the video that sort of proves it.
(37:00) A coffin that plays music ... is the dumbest idea ever.
(41:40) The floor is yours!