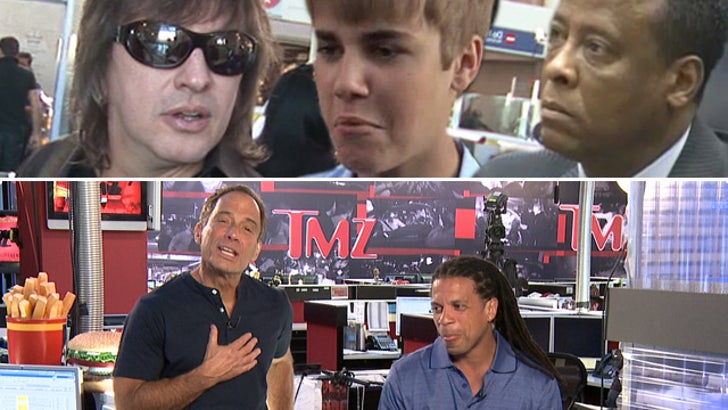 Richie Sambora and Jon Bon Jovi are going at it as if they Richards and Jagger! Richie's bailing on their tour ... and we know what it's gonna take to put the band back together.
Plus, Justin Bieber's so busted up over Selena Gomez that he's taking it out on the world?? That's what some people close to JB think -- but are you buying that from a 19-year-old filthy rich superstar?

(0:00) Bon Jovi hit the stage last night, without Richie Sambora! What caused the fallout?
(9:00) Justin Bieber's recent and alleged confrontations, all caused by a broken heart?
(14:00) Conrad Murray calls Anderson Cooper, and sings him a song.
(23:00) Busta Rhymes late night food craving ends with police being called. The restaurant owner calls in.
(27:00) Lamar Odom has been accused of running a bogus charity, who did the money go to?
(29:00) Diddy becomes the latest victim of a "Swatting" prank.
(31:00) Kobe Bryant gives us his two cents on EJ Johnson, Magic Johnson's gay son.
(33:00) Lindsay Lohan's bruised up bikini body raises a bunch of questions.
(36:00) The floor is yours!
(41:00) Hayden Panettiere and Wladimir Klitschko, the steamy beachside photos!