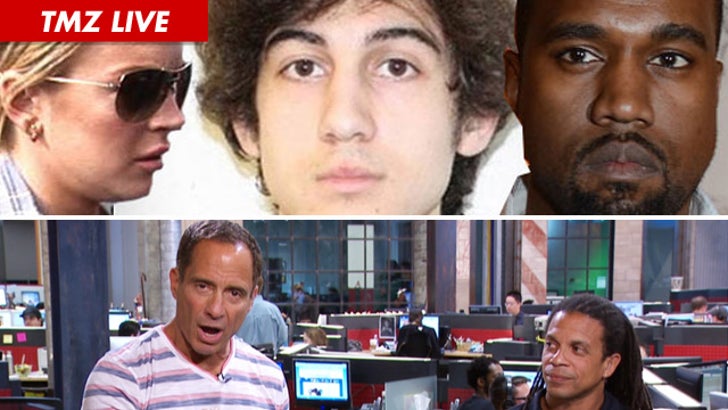 Lindsay Lohan wants out of rehab just 12 days into her court ordered 90-day stay! Docs are cutting her off from Adderall, but she wants it so bad ... she's willing to leave Betty Ford to get it. Question is ... If LiLo leaves will she finally get thrown in jail?
Plus, Boston bombing suspect Dzhokhar Tsarnaev has developed a twisted following of young girls on the Internet -- we talk to one who swears he's hot ... and there's ZERO proof that he's the bomber.
And,why did Kanye West explode on a photographer a few minutes after smashing his head into a sign? Someone here thinks KW secretly loves the attention. You buying that?

(0:00) Lindsay Lohan threatens to bail on rehab because they're taking away her Adderall. Is jail worth getting what she wants?
(6:00) Kanye West explodes on a photographer after bumping his head ... and someone in the newsroom thinks he secretly loves the attention.
(10:00) Jason Collins -- welcome aboard the gay welcome wagon!
(14:00) Brooke Mueller was so out of it before being hospitalized -- she was rambling on about being in the mafia.
(18:00) For some reason, a bunch of young girls are going crazy over the Boston Bomber Dzhokhar Tsarnaev. We talk to one ... who also thinks he's innocent.
(23:00) Rapper Chief Keef is 17 -- and is already paying child support.
(26:00) Jermaine Jackson comes to Michael's defense over Wade Robson's molestation allegations.
(28:00) Farrah Abraham -- is she really worried that she got pregnant during her porno? Or is it all for show?
(31:00) Prince Harry -- the new King of the Royals?
(33:00) Mel Gibson shows us a side that we haven't seen in ... well ... ever!
(36:00) The floor is yours!
(41:00) O.J. Simpson ... he's HUGE in prison!