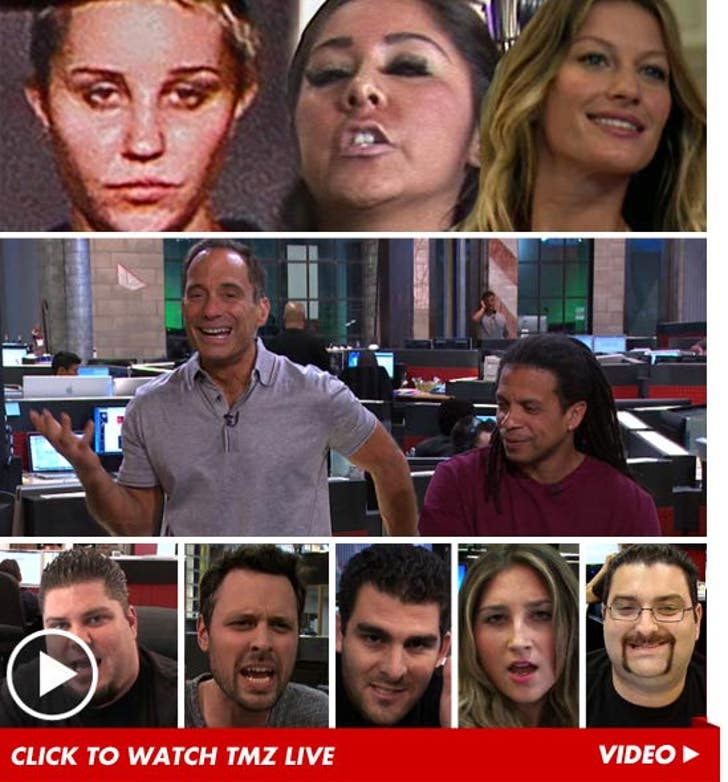 Amanda Bynes' arrest has most people thinking she's totally losing it ... especially after her wigtastic court appearance! But is she really off the rails -- you've gotta hear the new info we uncovered.
Plus, war on the Jersey shore ... Snooki and Governor Chris Christie went toe-to-toe on-camera! She might seem like the underdog, but we think Christie's the only one who can lose. Snooks' BFF Deena Cortese joined us to break down the fight.
Also ... Gisele Bundchen wants to ban Photoshopping -- easy for a 10 like her to say, but believe it or not this movement's picking up steam. Famous photog Tyler Shields explained why.

(0:00) Amanda Bynes was arrested in New York for marijuana posession, and allegedly throwing a bong out of her New York apartment window!
(10:00) Snooki meets New Jersey Governer Chris Christie, and shes does not like him invading her personal space.
(18:00) Supermodel Gisele Bündchen doesn't think photographers should photoshop models. Tyler Shields calls into TMZ Live to echo her statements.
(23:00) Rumors of Britney Spears residency in Las Vegas continue, but is she reall ready to take on such a commitment?
(28:00) Spurs player Tim Duncan is getting a divorce, but he says hes too busy to get divorced because of play-offs! Good enough reason?
(31:00) Steve Nash is blocking his ex-wife from moving to California, why does he want her to say in Arizona?
(33:00) Michael Clarke Duncan's tomb was vandalized, and it was racial.
(36:00) We hear what you have to say!
(41:00) Cypress Hill posts a photo of a $1,800 marijuana joint! The photo is insane!