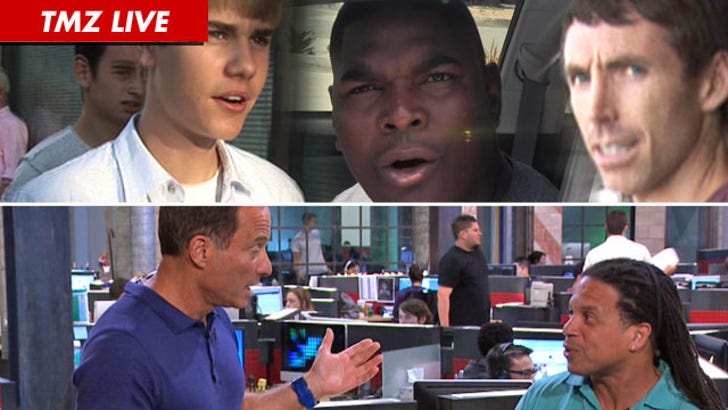 Keyshawn Johnson puts Justin Bieber on blast for driving through their neighborhood at breakneck speeds -- you gotta hear the former NFL star unload on him!
Plus, Steve Nash ignites a huge war in the newsroom -- after he said Los Angeles is a terrible place to raise your kids compared to Phoenix. Turns out some of us STRONGLY disagree!
And, rapper Lil Dicky's new song "White Dude" is unquestionably hilarious -- but some people say it's lil too racial. Dicky joined us to explain why his critics need to calm down and learn how to laugh.

(0:00) Amanda Bynes -- crazy ... or just acting the part?
(7:00) Ashton Kutcher and Demi Moore are at each others throats again -- we'll explain why.
(10:00) Chief Keef and Justin Bieber have a lot in common -- except one of them gets arrested all the time. Does race play an issue?
(13:00) Keyshawn Johnson rips Bieber to shred.
(18:00) Lil Dicky joins us to defend his hilarious song "White Dude."
(24:00) Lindsay Lohan's parents are the worst -- it looks like they staged their truce just to make some money.
(29:00) Oscar Pistorius -- bloody new photos may help his murder case ... but there are still a few giants holes in his story.
(32:00) Steve Nash rips Los Angeles for not being a good place to raise your kids ... and the newsroom GOES OFF.
(36:00) The floor is yours!
(41:00) A new Cherios commercial takes heat for showing a mixed family ... haven't we gotten past this already?