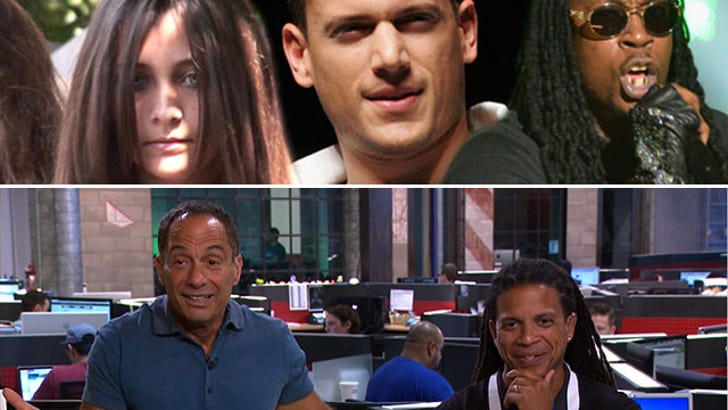 We broke the story ... Paris Jackson desperately wants to patch up her relationship with her brother Prince Jackson after months of blow out fights ... and her desire to mend fences reveals a lot about the Jackson family.
Plus, Wentworth Miller's coming out exploded on the Internet! Were fans just that shocked? Actually, we think it has everything to do with HOW he did it.
And 2 Chainz gets busted in OKC after an hysterical standoff that included his tour bus getting towed by cops ... with everyone still on board!

(0:00) Paris Jackson is looking to patch up things with her brother, Prince.
(5:00) American Idol wants Justin Bieber's manager, Scooter Braun, as their new judge.
(10:00) Lamar Odom dodges a bullet in the camera smashing case, and Kris Jenner says Lamar and Khloe are fine -- but are they really?
(15:00) Prison Break star Wentworth Miller comes out; he refuses to go to Russia until conditions change.
(18:00) Yahoo's Marissa Mayer's sexy Vogue photo shoot raises some eyebrows -- Flirty Girl CEO, Kerry Knee skypes in to discuss.
(24:00) 2 Chainz's tour bus standoff -- driver refuses to open the door to cops; cops tow bus with passengers inside.
(29:00) Lindsay Lohan defends herself -- hanging out with bad influence Vikram is actually a good thing she says.
(32:00) Paul Nassif throws in the towel -- a victory for Adrienne Maloof in court.
(34:00) Chris Brown shows off his newest graffiti -- on his car!
(36:00) The floor is yours!
(41:00) It's that time of the week: Tim's Rejects!