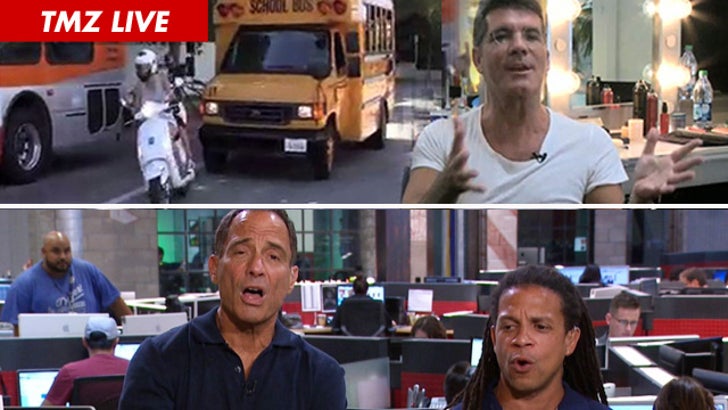 TMZ Live
Gwyneth Paltrow could have killed herself and one of her kids when she pulled her Vespa out in front of bus WITHOUT looking both ways ... why would she and Chris Martin take such a huge risk to transport their young kids?
Plus, Simon Cowell joins us to talk about fatherhood! What was his honest reaction when he found out Lauren Silverman was pregnant, will they live together -- and ... is MARRIAGE in the future?
And, a diamond-covered Paris Hilton drops by in grand fashion to explain how she beat the odds (and many critics) to become one of the biggest DJs in world.

(0:00) Gwenyth Paltrow pulls her Vespa out in front of a BUS ... while one of her kids was sitting on the back. She got lucky ... but what was she thinking?
(6:00) Simon Cowell joins us to talk about his future child, the "X Factor" reboot ... and to squirm when we ask him about the dreaded 'M' word (marriage).
(10:00) Jane Lynch's divorce is getting expensive -- will this finally show that gay marriage is just as risky as the heterosexual version?
(14:00) Lamar Odom roams the streets of LA at all hours of the night -- and it's a sad situation.
(18:00) Paris Hilton joins us to talk about becoming one of the most sought after DJs in the world ... and how she built an empire while everyone was counting her out.
(24:00) Miley Cyrus booted from the cover of Vogue after her MTV VMA performance ... and Harvey thinks it's a good thing.
(27:00) Tyra Banks dons white face to pay homage to legendary models -- should there be the same uproar there would be if a white model donned black face?
(30:00) Dr Phil pays $65k for a contraption that's supposed to extend your life. You buying it?
(32:00) The war in Syria -- why aren't celebs coming out against President Obama? (36:00) The floor is yours!
(41:00) One Direction singer Louis Tomlinson gets hurt -- then pukes -- in a celebrity soccer match ... and we have the hilariously disturbing video.