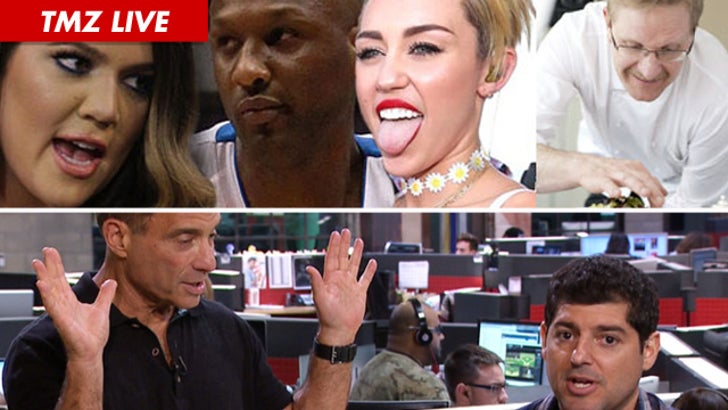 TMZ Live
Khloe Kardashian's patience for Lamar Odom finally runs out -- we'll tell you about their showdown ... and the pipe that broke the camel's back. Is it finally time for her to count her losses?
Plus, Miley Cyrus and Sinead O'Connor's epic feud -- it started off with a compliment ... and quickly escalated into a mud-slinging, mental illness and career dissing rants. Who crossed the line?
And, former White House chef John Moeller spills the beans about slinging hash for a bunch of former presidents ... including one incident in which one POTUS almost choked on his creation.

(0:00) Khloe and Lamar -- on the brink of divorce.
(6:00) Diana Nyad's honesty about Oprah Winfrey -- there's one word she probably wish she didn't say.
(10:00) Miley Cyrus and Sinead O'Conner's epic war of words.
(18:00) Former White House chef John Moeller joins us to give an inside look at the White House kitchen.
(24:00) The star from the new MTV show "Big Tip Texas" join us to explain how there's more to their show than getting drunk and showing skin.
(27:00) Kasey Kasem's family feud escalates -- and major action could come in the future.
(32:00) Melanie Griffith takes a major stand against our government ... minus ONE politician.
(36:00) The floor is yours!
(41:00) The "Breaking Bad" obituary that actually made it into an Arizona newspaper.