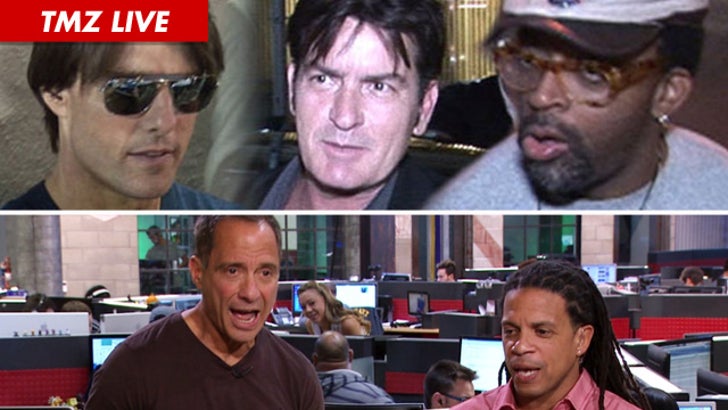 TMZ Live
Tom Cruise's statement that shooting his movies feels like going to war in Afghanistan ... has sparked a huge backlash -- especially on Veteran's Day. Do you believe Tom's attorneys when they say it was just a joke?
Plus, imagine Charlie Sheen's crazy custody war with Brooke Mueller as a reality TV show! Someone in Hollywood wants to make it happen. Would you watch?
And, Spike Lee tweeting the wrong address for George Zimmerman's house has come back to bite him -- the couple that actually lives there is now suing him ... and one of them joins us to explain how badly their lives have been affected.

(0:00) Tom Cruise compares being an actor to being a soldier in Afghanistan -- was he joking ... and if he was ... was it still out of line?
(10:00) Sarah Palin rips Levi Johnston for being a "deadbeat dad."
(14:00) It's the best/worst idea for a reality show ever -- after we found out Charlie, Brooke, Denise and the Medical Director of the DCFS all live in the same neighborhood.
(18:00) "Sex and the City" star Gilles Marini joins us to talk about going full-frontal -- after Michael Fassbender complained about all the talk about his penis.
(24:00) Spike Lee is being suing by the family who claims their peaceful life was ruined after he mistakenly tweeted out their address believing it belonged to George Zimmerman. We're joined by the woman who owns the house.
(29:00) Miley Cyrus lights up on stage at the Euro VMAs ... should we even care?
(32:00) UFC stud Chael Sonnen joins us to talk about his big upcoming fight -- and the recent bullying exposed by the Miami Dolphins situation.
(36:00) The floor is yours!
(41:00) Ben Affleck -- doesn't bat an eye at a parking ticket.