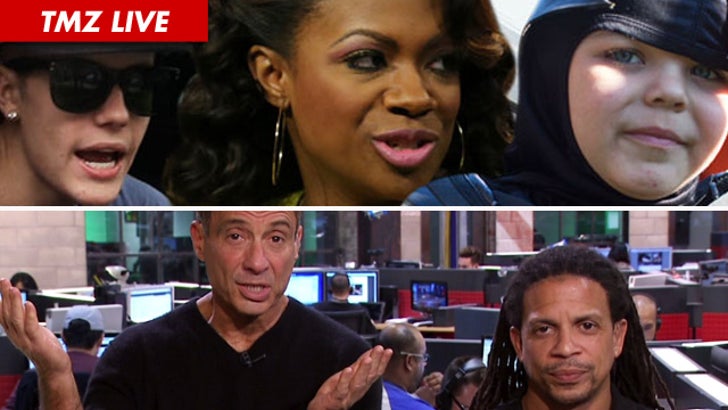 TMZ Live
Justin Bieber's massive party -- packed with celebs, and described by JB himself as Gatsby-esque -- came with a high-price tag: a $3 MILLION penalty for anyone who talks about the bash. Reasonable demand? Or is he just inviting the wrong people?
Plus, "Real Housewives of Atlanta" star Kandi Burruss joins a talk about the crazy brawl that went down on the show -- and why the ATL ladies are getting bad rap for no reason.
And, the Batkid from "Make a Wish" has been warming our hearts all weekend -- but one of our staffers somehow managed to find a problem with it. It's about to get really awkward.

(0:00) Justin Bieber's insane rager -- and why it will cost you $3 mil if you spill the beans on what went down inside.
(6:00) Kanye West has had it President Obama -- and totally calls him out.
(10:00) Jay-Z chooses NOT to cut ties with Barney's after the company was accused of racially profiling African Americans ... we'll tell you why he made the decision.
(14:00) Alec Baldwin's daughters comes to his defense -- but there's a fundamental flaw in the family's excuse for his rants.
(18:00) Kandi Burruss joins to talk "Housewives" brawls, TLC (she wrote "Scrubs" and her new musical.
(24:00) A Nick Cannon impostor makes off with tons of jewelry ... you won't believe this story.
(27:00) We apologize in advance -- but one of our staffers has a problem with the Batkid story. Did we apologize for it yet? Well we do.
(32:00) A shooting near the set of "House of Lies."
(36:00) The floor is yours!
(41:00) Jennifer Lopez does her own stunts ... in high heels. Respect.