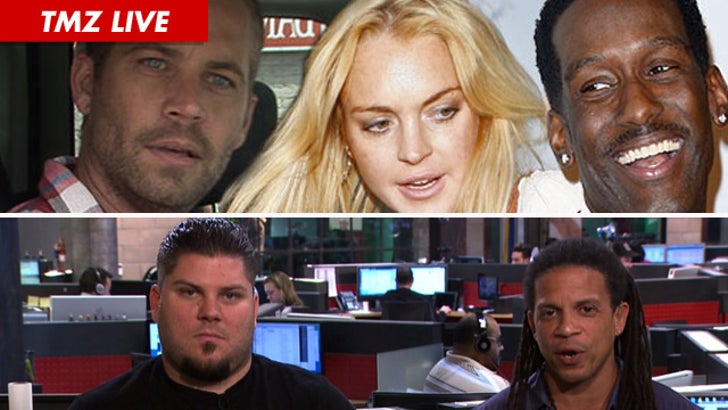 Paul Walker's death has everyone -- friends, family and police -- searching for answers as to HOW the accident happened. Were Paul and his friend Roger Rodas in a street race ... or was there a fatal mechanical failure in the Porsche? We have info from people who were close to both men.
Plus, Lindsay Lohan goes after the makers of Grand Theft Auto V -- claiming they ripped off her identity for a character in the wildly popular video game. History says she might have a case, but are you buying it?
And, Boyz II Men singer Shawn Stockman joins us -- so does he agree or disagree with Cher's claim that doing Las Vegas shows are terrible because the audience is too old to have fun?

(0:00) Paul Walker's death sent shockwaves around the world -- we'll give you all the details about how it happened -- and talk to eyewitnesses of the crash and a long-time friend of the other victim.
(10:00) Country star Luke Bryan drinks and drives -- but it's not illegal ... and we'll tell you why.
(14:00) Justin Bieber's bodyguards allegedly attack photographers again -- and this time it's caught on video.
(18:00) Boyz II Men singer Shawn Stockman joins us to shoot down Cher's claim that audiences in Las Vegas are so close to death ... the shows are no fun to do.
(24:00) Suge Knight arrested at gunpoint -- did cops use excessive force ... or were they just playing it safe.
(27:00) Michael Jackson's estate fires back at Dr. Conrad Murray for revealing weird secrets about MJ's last days ... but the doc's not backing down.
(32:00) Lindsay Lohan swears GTA 5 is using her image -- take a look for yourself.
(36:00) The floor is yours!
(41:00) The Kardashians' new Christmas card ... a major dis to one family member.