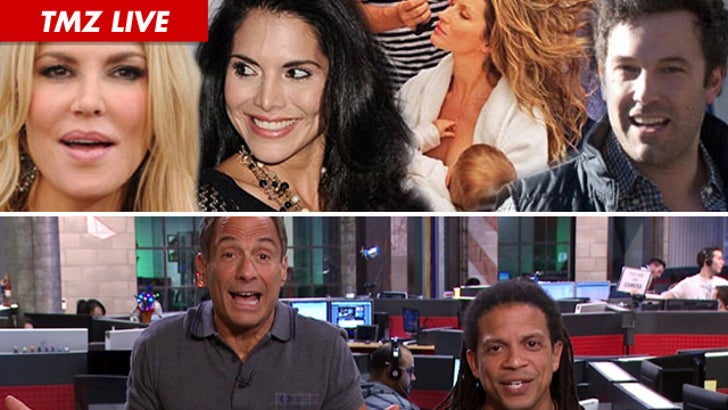 "Real Housewives" is the new "Big Brother" after Brandi Glanville cracked a racist joke about Black people and swimming. We're joined by the person Brandi directed it at -- Joyce Giraud -- who fires back at her foul-mouthed co-star.
Plus, Gisele Bundchen's a huge proponent of breastfeeding ... and she proved it by posting a pic of herself and her baby (in the act) -- WHILE she was getting done up for modeling. So, is her humble brag photo ... empowering or offensive to non-celeb moms?
And, Ben Affleck's shocking comments about Republican actors divides our newsroom -- did he shoot himself in the foot ... or make a good point?

(0:00) "Real Housewives" star Joyce Giraud joins us to pick apart Brandi Glanville for her racist comment.
(7:00) Paul Walker's death -- could have ultimately been caused by some tiny pieces of plastic.
(10:00) Ben Affleck says he gets taken out of a performance if he knows the actor is a big Republican ... igniting a major argument in the newsroom.
(15:00) Amanda Bynes out and about at Disneyland -- more signs she's getting better ... but some have their concerns.
(18:00) Gisele releases a photo of her breastfeeding at work -- and splits the newsroom.
(24:00) Pauly D sounds genuinely excited about being a father -- which brings up an interesting point about positive stereotypes.
(29:00) Kim Kardashian ripped for only giving 10% of proceeds of a sale to charity ... totally unfair?
(32:00) Cameron Diaz drops $9 million on a new pad ... a tiny new pad in NYC.
(36:00) The floor is yours!
(41:00) Our angriest viewers get a chance for revenge in this week's hate mail reading!