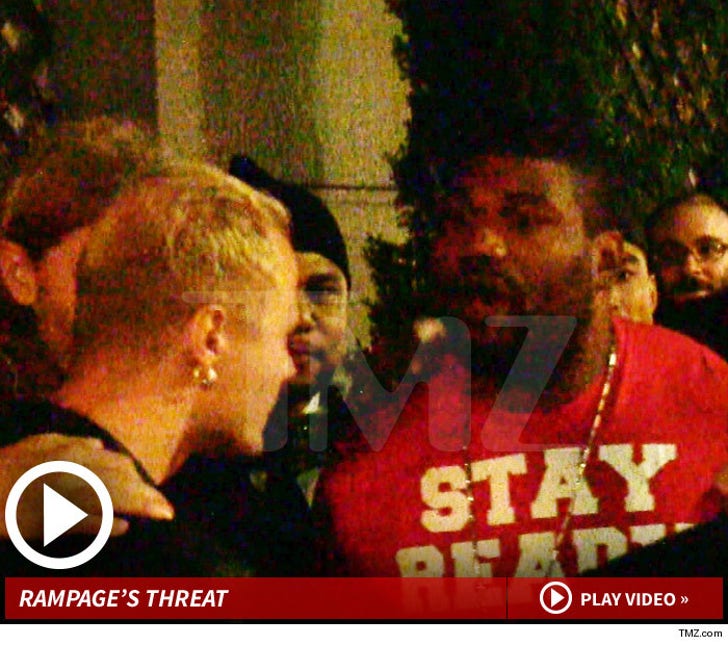 Rampage Jackson was thiiiiis close to DESTROYING some guy outside of a Hollywood club this weekend -- threatening to SEND HIM TO THE HOSPITAL if he didn't apologize for disrespecting Rampage's GF ... and TMZ Sports has the footage.

The ex-UFC light heavyweight champ faced off with the seemingly intoxicated clubber outside AV Nightclub early Sunday morning ... after Rampage was told the clubber grabbed his girlfriend's butt.

You can hear Rampage tell the guy, "TELL MY GIRLFRIEND SORRY AND YOU AIN'T GONNA DO THAT S**T NO MORE ... OR YOU ABOUT TO GO TO THE F**KING HOSPITAL."

When Rampage's threat was met with a dumbfounded look from the clubber, the MMA fighter shot back ... "You think I'm lying??? He thinks I'm lying!!"

Eventually, security got between the two and broke up the situation ... probably saving the clubber's life in the process.

And there's this ... We never actually heard the clubber apologize.

Rampage has to be careful when it comes to street brawling -- since he's a trained fighter with lethal force , his hands almost certainly would be considered a lethal weapon under the law ... and he could get in enormous trouble if he hurt somebody.

Rampage is no stranger to public displays of aggression -- back in 2008, he led cops on a crazy monster truck chase through Orange County, CA ... and was eventually taken into custody at gunpoint.