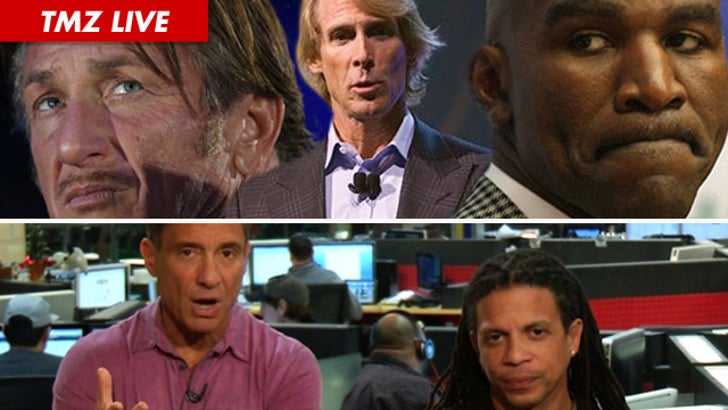 Sean Penn got sheriff's deputies to march him a whopping 10 feet to his car last night in West Hollywood. Question is -- why were cops called in the first place?? Why did Sean get special treatment which no other star ever gets when facing paparazzi?
Plus, "Transformers" director Michael Bay's epic meltdown at a Las Vegas trade show. What went wrong? We'll get the explanation straight from Michael when he joins us today.
And, Evander Holyfield's son Ewin joins us following Evander's anti-gay rant on "Big Brother UK" -- so whose side to you think Ewin's on?

(0:00) Sean Penn escorted out of a restaurant by THREE cops -- we get to the bottom of it.
(6:00) "Young and the Restless" star Michael Muhney -- his ousting for allegedly groping a cast member isn't the only crazy allegation against him.
(10:00) Michael Bay joins us to explain his bizarre meltdown at an electronics event.
(15:00) Young Jeezy's arrest -- we'll tell you all the frightening allegations.
(18:00) Evander Holyfield's son joins us to defend his father for making anti-gay comments on "Big Brother UK."
(24:00) Michelle Obama under fire for her extended vacation with Oprah Winfrey.
(29:00) Shia LeBeouf's audition for "Nymphomaniac" involved sending a picture of his penis to the director.
(32:00) "SNL" hires a Black female cast member -- we'll tell you why she's got what it takes to make it.
(36:00) The floor is yours!
(41:00) Jay Z pulls up a 12-year-old kid on stage to rap -- but it totally wasn't a set-up ... we swear.