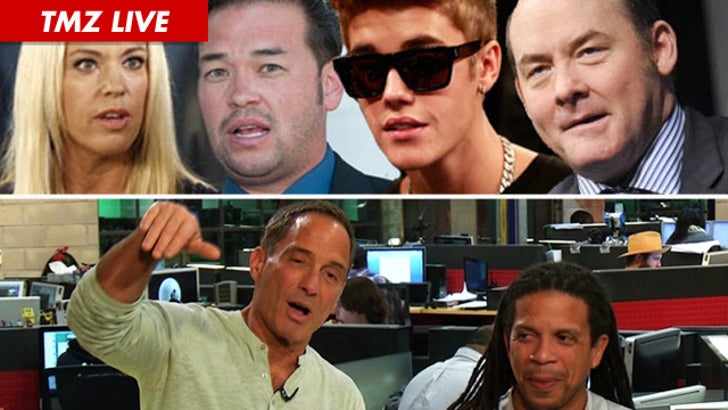 Kate Gosselin tried to parade her kids out on TV ... expecting them to shout to the world how great their lives are now -- and it blew up in her face ... hysterically. Did she get what she deserves? Jon Gosselin joins us to explain what he thinks was behind the disaster.
Plus, Justin Bieber's biggest concern after the egg raid has nothing to do with the egg investigation -- instead he's worried about nude pics and drug references on his confiscated phone. What's Bieber hiding?
And, "Anchorman 2" star David Koechner joins us to reveal what Kanye West was like on set -- and explain why he bailed on a career in politics for comedy.

(0:00) Kate Gosselin's daughters go silent on the Today show -- and it's hilariously awkward. But what's behind their on-air shutdown?
(5:00) Justin Bieber's phone -- cops have it ... so what's one it? And who are in the nudie pics he's worried about?
(10:00) Trace Adkins allegedly beats the crap out of his impersonator after falling off the wagon -- then beelines for rehab.
(15:00) A former Playboy playmate tragically dies -- we'll tell you how it's related to Whitney Houston.
(18:00) David Koechner from "Anchorman" joins us to talk about what Kanye West was like on set ... and why he bailed on a career in politics.
(24:00) Jon Gosselin joins us explain why his daughters "Today" appearance proves reality TV -- and Kate -- are terrible for them.
(29:00) A huge Vine star accused of raping his girlfriend --we have all the details.
(32:00) "Fantasy Factory" star Chris "Drama" Pfaff joins us -- we ask him if Justin Bieber is bad for his clothing company ... and why he let his girlfriend take his Lambo for a spin.
(36:00) The floor is yours!
(41:00) It's time again for ... Tim's rejected pitches of the week!