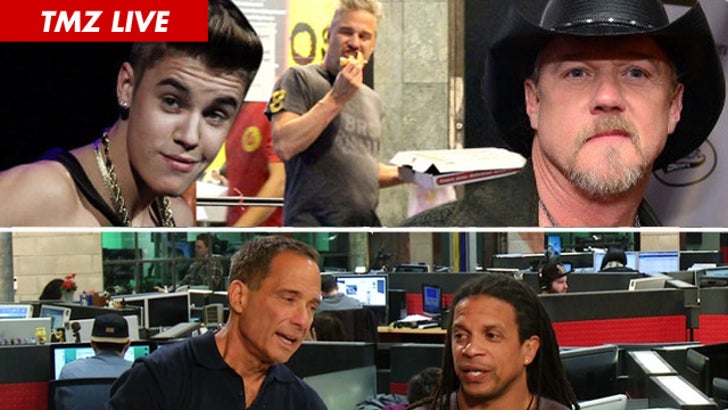 Justin Bieber's party train (private jet) stopped in Miami for a $75,000 night with the best strippers in town. $75K??? Is this JB's version of retail therapy after the raid and his pal Lil Za's drug bust?
Plus, Britney Spears' ex-bf Jason Trawick looks a lot different a year after their breakup. We got a photo of him sporting a few extra pounds, but now he's promising to slim down ... and quickly!
And, an eyewitness to country music star Trace Adkins' drunken cruise ship altercation with his impersonator joins us to describe how it all went down ... and reveal new shocking details!

(0:00) Justin Bieber blows a ton of cash on strippers -- but at least they were the best of the best.
(6:00) Britney Spears ex Jason Trawick fattens up after their breakup -- then makes a promise to TMZ that he's gonna get back into shape.
(10:00) Kanye West could make the battery case against him go away ... if the price is right. Should he fight it?
(14:00) "The Butler" director Lee Daniels says he doesn't make movies to win awards ... you buying what he's selling?
(18:00) Shayne Lamas and Nik Richie join us to explain how the hell they're still married after getting hitched in Las Vegas 12 hours after meeting each other.
(24:00) Robin Thicke gets frisky with a woman at a club -- so if his wife is cool with it ... is it right?
(29:00) An eyewitness to Trace Adkins cruise ship altercation with his impersonator calls in to explain how it all went down ... and if she's gonna sue over it.
(32:00) Our camera man wins an award -- for comparing "Keeping Up the Kardashians" to Shakespearean play in front of Ryan Seacrest.
(34:00) "Dance Moms" war goes to court ... and the cameras were rolling of course.
(36:00) The floor is yours!
(41:00) "Entourage" director's mishap in front of a ton of bikini clad extras ... including Ryan Seacrest's fling.