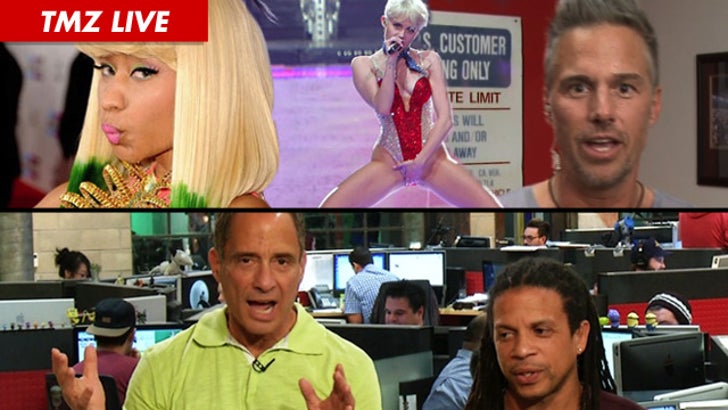 Nicki Minaj's wigs are what made her famous, not her rapping ... according to her former wig maker who's now suing for $30 MILLION!! Does he deserve a cut of her riches?
Plus, awwwwkward moments at Miley Cyrus' concert last night -- ass in the air, simulated masturbating and blow jobs ... all while her parents and brother were forced to watch. Should Billy Ray Cyrus be cool with it by now?
And, Jason Trawick -- Britney Spears' ex and former manager -- joins us a few weeks after we got photos of him packing a major gut. Did he lose the weight like he said he would?

(0:00) Christina Aguilera's pregnant -- you have to hear Harvey's theory about her future weight loss/gain.
(5:00) Miley Cyrus' crazy sexual live show ... and her parents were in the audience!
(10:00) Mel Gibson's ex Oksana Grigorieva screwed herself out of tons of money not long after screwing herself out of tons of money.
(15:00) Nicki Minaj sued over her crazy wigs -- does her former wig man have a case?
(18:00) Jason Trawick joins us to show off his shocking weight loss.
(24:00) Rihanna is hot water for posting photos people say are super racist ... and other think are funny.
(32:00) Korn lead singer Jonathan Davis joins us to explain his theory that the government gets away with heinous things while we all ogle at celebrities.
(36:00) The floor is yours!
(41:00) The smartest Girl Scout ever ... sells cookies in front of a weed shop!