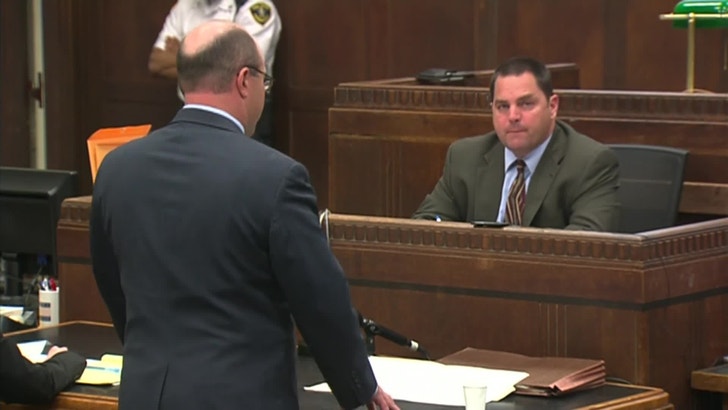 Aaron Hernandez decided to KILL TWO PEOPLE because he was mad one of them bumped into him at a nightclub and spilled his drink ... this according to prosecutors.

The former NFL star appeared in court in Massachusetts today where he was arraigned on murder charges for allegedly killing two people back in 2012.

Prosecutors spelled out their case against Hernandez -- saying he was at Cure nightclub in Boston on July 15th 2012 when he had a chance encounter with one of the victims, Daniel Abreu.

Officials say Hernandez had become increasingly paranoid that people were trying to disrespect him and were "testing" him in Boston-area nightclubs around the time of the killing.

Once inside the club, prosecutors say Abreu was dancing and bumped into Aaron, causing Aaron to spill his drink.

Officials say Aaron believed Abreu smiled and did not apologize -- and that set Aaron off.

Prosecutors say Hernandez got very worked up about the spilled drink -- pounded two more cocktails -- and scoped out the area around the club, waiting for Abreu and his group to leave.

Aaron then grabbed a loaded .38 caliber revolver he had hidden in his car and followed the car the victims were in.

Prosecutors say Aaron pulled up to Abreu's car at a stop light and said, "Yo what's up now?" -- then fired all of the bullets in his gun, killing Abreu, his friend Safiro Furtado and wounding a 3rd passenger.

Witnesses say they could hear Aaron continue to pull the trigger even after all of the bullets had been fired.

Prosecutors say Hernandez then ADMITTED to the shooting to an associate saying, "I think I got one in the head and one in the chest."

Hernandez pled NOT GUILTY to the murder charges -- and his attorney begged the judge to not let the trial turn into a media circus.