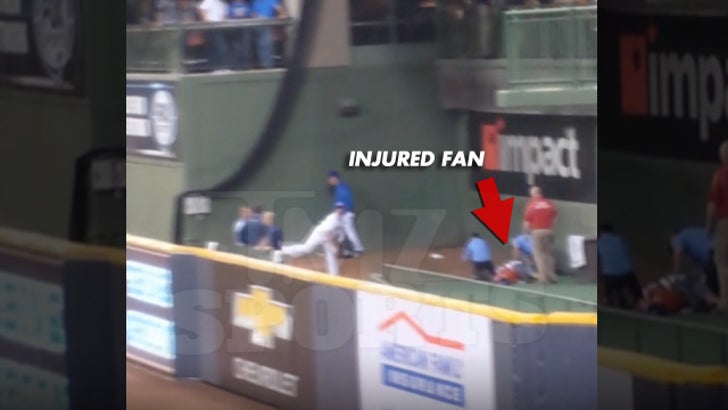 With paramedics treating a severely injured fan who plummeted 15-feet into the bullpen, a Milwaukee Brewers pitcher grabbed a baseball and began WARMING UP just feet from the guy ... and TMZ Sports has the video.

The fan had fallen over a railing at a restaurant that overlooked the bullpen during Tuesday night's game -- and laid motionless as medical personnel scrambled to treat him.

But while paramedics went to work, so did one of the Brewers pitchers -- who appears to be Brandon Kintzler.

It's shocking, considering after the game Kintzler told the media he thought the guy could have been dead -- "I thought he died. We were sitting there and [catcher Marcus Hamel] yelled, 'Oh, gosh!' He didn't move for a few minutes. I thought he was dead."

Kintzler explained, "It's not something you want to see. They're basically giving this guy CPR and I had to warm up. It was tough. It's not the best thing to see at the time."

The fan was eventually put on a stretcher ... and as several men tried to carry him through the outfield to receive further medical treatment, one of the people handling the stretcher tripped and fell ... hard.

Eventually, the injured man was transported to a nearby hospital -- officials say he was conscious and alert and has since been released.

Calls to the Brewers have not been returned.