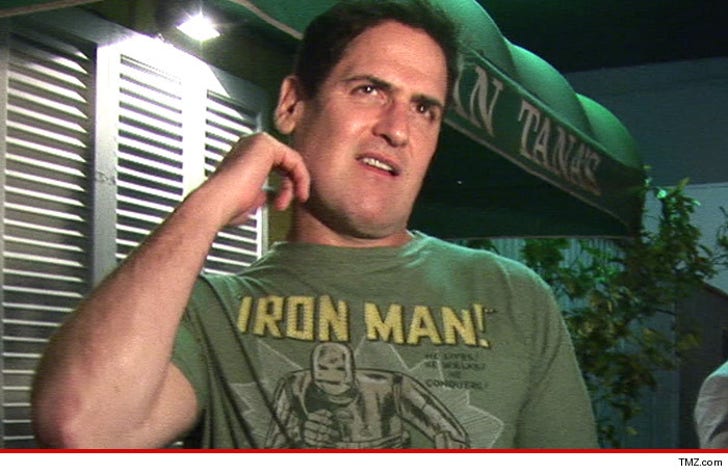 The legal system-abusing prankster who filed an insane lawsuit against Johnny Manziel has apparently struck again -- and this time, his target is Dallas Mavericks owner Mark Cuban.

TMZ Sports has learned ... Cuban was sued in District Court in Northern Texas by someone claiming to be Lisa Lazzari ... the sister of former "Shark Tank" entrepreneur Lani Lazzari (owner of Simple Sugars body care company).

In the suit, the plaintiff demands $15 MILLION and makes bogus and comically outrageous claims against Cuban ... including:

-- Cuban visited the Simple Sugars store and "told me I look hot and I told him I'm a lesbian. Cuban told me to perform oral sex on him in the bathroom and if I don't Cuban will quit his investment in Simple Sugars."

-- "Cuban told me if I give him an [HJ], he will give me season tickets in a suite at the Dallas Mavericks. I told Cuban NO, that I'm a lesbian."

In the suit, the hoaxster also goes after Mark's "Shark Tank" buddies ... saying Lori Greiner owns a company that makes crappy salad bowls and Daymond John's FUBU clothes are made in sweat shops.

The lawsuit seems to be the handiwork of notorious lawsuit prankster Jonathan Lee Riches -- an inmate who's suspected of filing similar bogus suits against famous people like Johnny Manziel.

FYI -- the suit against Manziel, in which the NFLer was accused of jingling his penis at Disneyland to the tune of "It's a Small World" -- was recently tossed out by a judge.

We spoke to Cuban who tells us, "In our system we have to take the good and the bad. Anyone can file a lawsuit. As a result, we have to deal with people like this and the lawyers at the SEC. Both take advantage of the many grey areas in the law."