Rudy Giuliani was on the ropes as he tried defending Donald Trump on a Sunday morning talk show.

The former NYC Mayor was on "Meet the Press" as Chuck Todd grilled him about comments the candidate made on Howard Stern's show ... that he walked in on naked beauty pageant contestants in 2008.

Giuliani had a lot of trouble explaining whether this was just talk or whether Trump really did it. 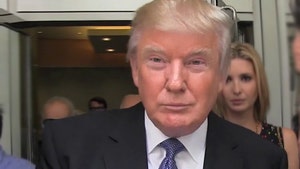