Prince William and Kate Middleton hit up the Royal Variety Performance Friday and celebs were out in force to rub elbows with them.

It's an charity annual event ... the 2017 installment went down at the Palladium Theatre in London. The money raised benefits people who need help as a result of old age, ill health or hard times.

As for who showed ... Kelsey Grammer, Simon Cowell, Christopher Dean, Henry Conway, Seal and Louis Tomlinson ... among others.

Very swanky for sure. 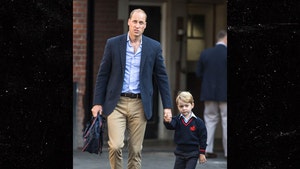