Paula Abdul took a tumble Saturday night during her show ... but she was a true trooper.

Paula went down during her concert at Hard Rock Live in Biloxi, Mississippi. Watch the video, as she saunters from the back of the stage to the front ... then just disappears into the crowd. It appears people in the audience helped her back on stage.

Eyewitnesses say Paula got up and continued on with the show. It's unclear if she hurt herself, but she didn't show it. Fact is ... Paula has had various injuries over the year but has never really been sidelined. As they say ... "The show must go on." 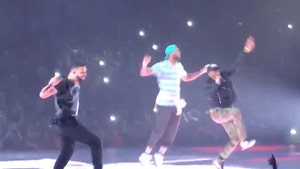