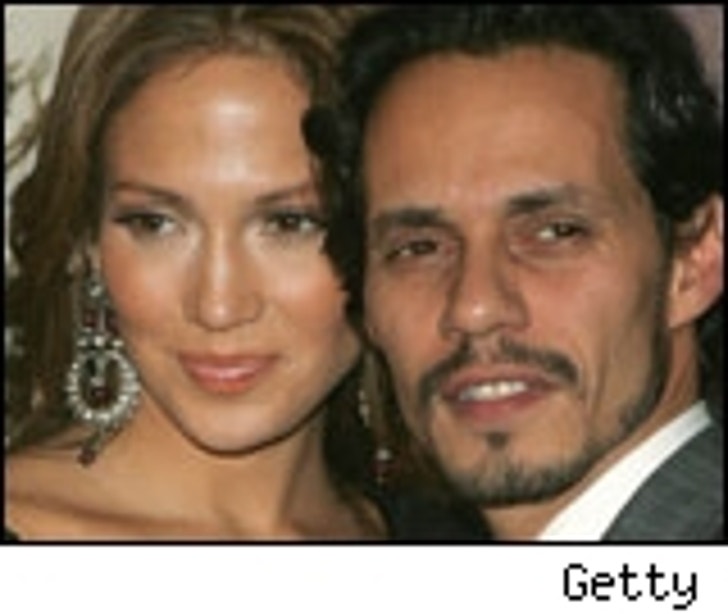 The New York Post is reporting that two men were arrested yesterday after trying to extort Marc Anthony and Jennifer Lopez for $1 million. The men were hoping to profit off of the couple's stolen wedding video.

The men, Tito Moses, a convicted murder, and Steven Wortman, allegedly had been in negotiations with Anthony's legal advisors for several weeks. They thought they were meeting to make the exchange -- but instead they were busted by undercover cops from the Major Case Squad.

The wedding photos were on Anthony's laptop computer, which was stolen along with his 2005 Cadillac while he was shooting a music video in New Jersey in October. The car was later recovered, but the laptop wasn't.

According to the New York Post, the TV show 'Access Hollywood' was contacted by a man identifying himself as "Mr. Moses," who was offering to sell the video. The show then contacted Anthony's reps, who contacted the NYPD. The Major Case Squad then came up with Tito Moses as a possible suspect.

The Post reported on the missing laptop on Dec. 18.

Negotiations for the video supposedly started at $1 million, but Anthony's reps negotiated them all the way down to $150,000.

Cops said to the Post that Moses has a wrap sheet that includes arrests for robbery, gun possession and attempted murder -- in addition to the murder case that sent him to prison for 15 years. Wortman has never been arrested.

TMZ called for comment, and was told that, "arrests were made, property was seized." No information officersd were available for futher elaboration.