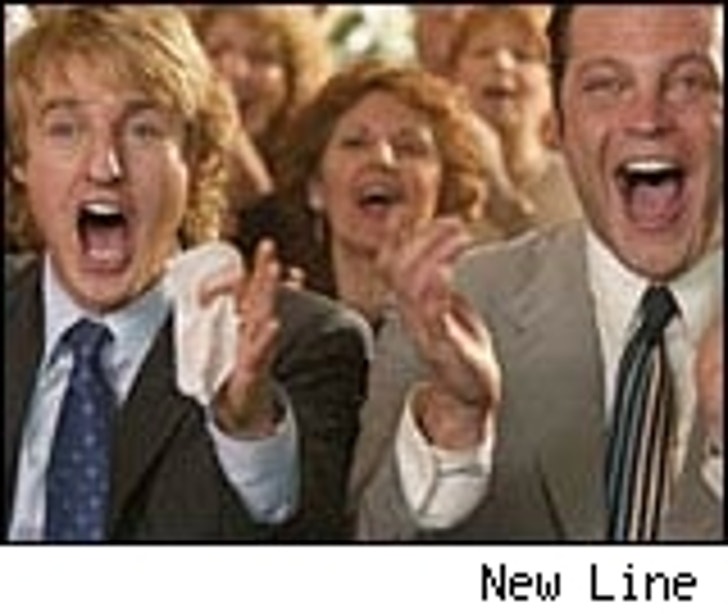 The blockbuster comedy 'Wedding Crashers' put the spotlight on a longtime underground practice: people showing up uninvited at weddings. Owen Wilson and Vince Vaughn made the fun so convincing, the movie just may have influenced the rise in people crashing weddings.

So TMZ took an an informal survey of wedding-reception halls around New York City and Los Angeles, and found that there actually have been an increase in wedding crashers, especially since the movie's July 15 release.

"Most wedding crashers are between the ages of 16 to 21," reports Lorin Kalin, director of Belmont Shore Chalet, a popular wedding-reception hall in Long Beach, Calif. "Because it's young people who want to sneak in to get alcohol. The movie may be the reason for why more people are crashing weddings, but the people who crash weddings usually aren't going to say that it's because of the movie."

'Wedding Crashers' was the top-grossing comedy of the year, taking in $209 million at the U.S. box office. New Line Cinema will release the movie Jan. 3 on DVD in the original R-rated version, along with an unrated version.

The movie, which stars Wilson and Vaughn as the title characters, highlights the romantic complications that can occur when people show up uninvited to a wedding.

Those awkward wedding-crasher situations also happen in real life, says Kalin. "At one wedding reception, there was a teenage couple: a girl and her date. But the girl's boyfriend was also at the wedding and didn't know she was going to be there with another guy. It got really testy and it looked like there was going to be a fight, but security calmed everyone down."

Teenagers may be the easiest wedding crashers to spot, but Kalin says that older professionals -- like the ones portrayed in the movie by Wilson and Vaughn -- may get away with more if they fit in with the crowd.

And what happens when wedding crashers are outed at the event?

Kalin continues, "If there's security, they usually ask the bride and groom if they'll allow the uninvited person to stay. If the wedding crasher isn't causing any problems, they usually get to stay."

'Wedding Crashers' may be considered the copycat movie of the year. (Thank goodness it wasn't 'Miss Congeniality 2: Armed and Fabulous'.) So we started wondering about which upcoming 2006 flick could inspire a bunch of copycats?

'John Tucker Must Die,' starring Jesse Metcalfe (the hot gardener on 'Desperate Housewives'), is about a high-school stud who's unknowingly set up by three of his girlfriends who join forces to find another girl to break his heart.

'The Benchwarmers' stars Rob Schneider, David Spade and Jon Heder as three guys who try to relive their childhoods by starting their own baseball team and taking on the best elementary school baseball players in the state. Wow! Talk about arrested development!