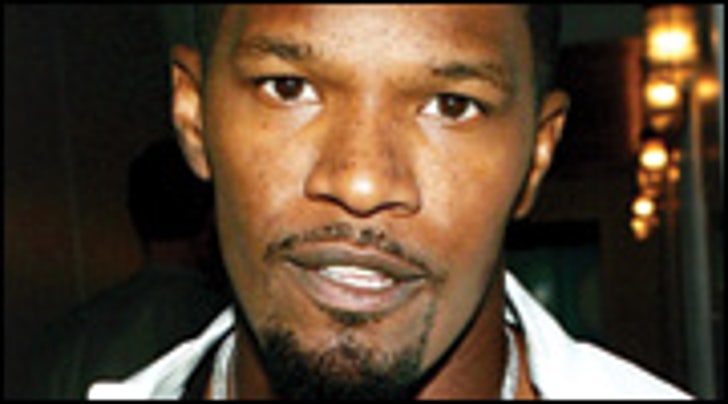 Oscar winner Jamie Foxx is proving to be a real lothario while promoting his new album, 'Unpredictable,' in the UK, reports The Mirror. Jamie's skirt-chasing antics would make even serial lady-killers like Colin Farrell and Jude Law blush.

Before appearing, Foxx requested that only women be allowed to the front of the stage when he started to sing. After performing some songs, he disappeared with four shapely female admirers into his VIP area. When a reporter inquired what Foxx was doing, his minder cooly replied, "What goes on in the boudoir, stays in the boudoir."

During his raunchy show, Jamie also danced slowly with British rapper Estelle before announcing to the crowd that he loved "chocolate ladies."

Jamie and his entourage then hit Pangaea nightclub where he was spotted chatting up Sugarbabe singer Keisha Buchanan. But although she spurned his advances, that didn't stop Mr. Foxx from leaving the club with another gorgeous model-type.

A spokesperson confirmed that the star was in London to promote 'Unpredictable,' which is released throughout Europe on Monday.